Pakistan have begun life without Misbah.

Life in Test cricket after the retirements of Misbah ul Haq and Younis Khan has not been too kind on Pakistan. In the first match since the two icons of Pakistan batting called time on their illustrious careers, Sarfraz Ahmed’s young side capitulated in the Abu Dhabi Test. It was the left-arm spin of Rangana Herath that proved their undoing as the hosts fell short of the 136-run target by 21 runs.

Replacing two players who accounted for more than 15,000 runs and 15 century stands was never going to be easy, maybe even impossible. Pakistan were always going to face some batting troubles somewhere down the road as batsmen take years to develop their game to the level of Misbah and Younis. But hardly anyone expected their batting to fail so miserably in its first challenge itself, and that too on ‘home’ turf against a Sri Lankan side that had been blanked 9-0 across formats by India a month back.

But Test cricket has its own rules. And against the gules of a 39-year-old assassin, Pakistan’s batting line-up were given an almighty reality check.

Misbah can only watch as the team he nurtured tries to walk on its own. And despite the stunning reversal against Sri Lanka, the 43-year-old said there is no need to lose hope as he expected Pakistan to have a tough time against Herath.

“Even before the series started, we knew Rangana Herath was going to be a major factor for our inexperienced batting line-up. He is one of the biggest threats in the world. Even for experienced batsmen, he poses a lot of problems. So this was more or less on the cards,” Misbah said in Dubai during the launch of the T10 Cricket League tournament.

“The good thing is the openers did well and I was especially pleased with the way Haris Sohail played in both innings. He played a mature innings in both outings. Yasir Shah’s bowling was excellent. Pakistan will need to change their strategy against Rangana Herath in the second innings. If you think he is going to bowl a bad ball, that’s not going to happen. You will have to take a chance.” 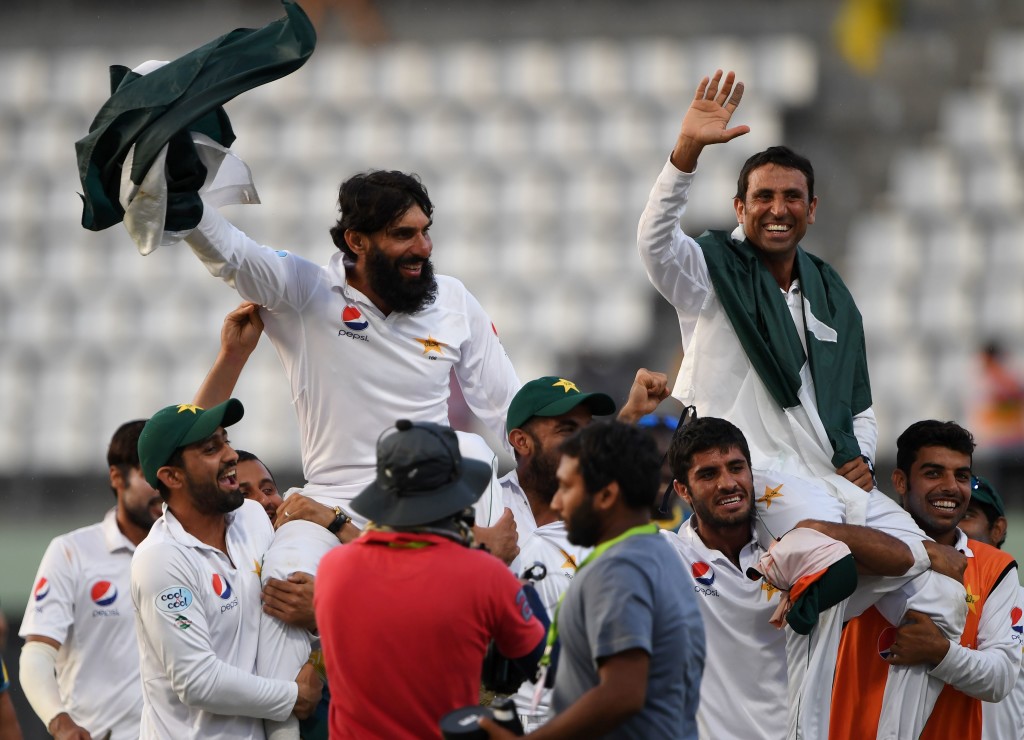 Misbah said losing two experienced batsmen at the same time was always going to problematic as batsmen need to more time to get prepared for what Test cricket has in store. But the former captain is confident if the team makes a few tweaks in the batting line-up, they should get back on track soon.

“We saw what happened to Sri Lanka when Kumar Sangakkara and Mahela Jayawardene retired… especially, in the batting department. Such results happen in this format at the beginning until such time the batsmen get the experience of various situations.

“Yes it (result) is a concern, still there is potential in the team. They need to improve their performance 10 to 15 percent.

“Asad Shafiq had to come up the batting order as he has been playing for a long time. Sarfraz batting at number seven…he is one of our most experienced batsman and I think he is a number five batsman. When players retire, you need to make a few changes. Your combinations won’t work from the first match itself. We need to give the team some cushion.”

While the Pakistan team is adjusting to life without Misbah, the batsman himself is still very much a part of the game. Misbah was unveiled as Team Icon of Punjabi Legends team in the latest venture in the fast-changing world of cricket – 90-minute long 10-overs a side games that will be played by some of the biggest names in Sharjah from December 21-24.

While T20 cricket has revolutionised the way Tests and ODIs are being played, and it is thought the T10 format will bring more – hopefully positive – changes to the game.

Australia pacer James Pattinson ruled out of Ashes after re-aggra...

“Now maybe even three hours is too much. It’s always important to keep moving forward. To expand the game, you need to think new ideas. Hopefully it (T10) will attract new audiences and fans, especially those who are more keen on football. It’s a 90-minute game and they should have more interest in that,” Misbah added.

Be it a five-day contest or 10-overs-a-side cricket, Misbah believes there is scope for quality in all versions and cricketers can gain from the new format, the same way they did when T20 made its debut in the early 2000s.

“T10 has scope for proper cricket skills. Even in six overs cricket. It’s difficult to survive without basic skills in any format at the top level. When T20 was introduced, everybody thought there was no place for proper batsmen. But guys like Hashim Amla, AB de Villiers, Virat Kohli… the guys who are good in Test cricket are also the top batsmen in T20 cricket. You need some method to dominate in T10 cricket,” he added.

“That was some concern overall that Test and one-day cricket is fading a bit. But the kind of cricket we saw during the Champions Trophy… that set one-day cricket alive again. Whatever the format, we just need to go for quality cricket.”

If there is one area where the shortest formats have made the biggest impact is fitness, with even teams like Pakistan and India setting up measurable fitness standards and ensuring players, howsoever ‘big’, pass them before being considered for selection.

Some say fitness is more important that pure skill in slam bang cricket. Misbah agreed: “Fitness is very important given the amount of cricket we are playing. It is not just about being physically fit. When you train hard, it helps your mental game as well. When you are mentally switched on, you can perform in pressure situations. The guys who are fitter and do more training, they are generally mentally stronger. They perform in pressure situations.”