The dawn of Pakistan's new Test era will take some time to arrive.

Pakistan’s Test series against Sri Lanka was meant to herald the dawn of a new era for the country in the longest format of cricket.

Sarfraz Ahmed would take charge of the Test team for the first time since taking the reins of the squad in the limited-overs formats. In front of him lay an opposition who had just been completely swept aside 9-0 in all formats on home soil by the high-flying Indians.

Misbah-ul-Haq and Younis Khan, two icons and legends of the game in the country, had hung up their boots and for the first time in years, Pakistan would line up in the whites without the two veterans.

For long those two had been the rocks through which Pakistan cricket had revived and reinvented itself after the scours of spot-fixing and an international boycott of cricket in the country following the terrorist attacks on the Sri Lankan team bus in 2009.

The team has since then been forced into playing its home matches in the Middle East with the UAE becoming its temporary home.

While playing in the UAE was a reminder of lack of international cricket back at home, Pakistan thrived in the desert state having never lost a Test series there ever since moving to their new base in 2009.

After the surprise triumph in the ICC Champions Trophy in England earlier this summer, Sarfraz Ahmed and his band of merry men had been destined to create new hallmarks in the Test format.

While the loss of the two greats was a huge void to fill, the team was littered with talented players coming into their prime. Mohammad Amir and Hasan Ali are formidable pacers while Yasir Shah provided the edge in the spin department. 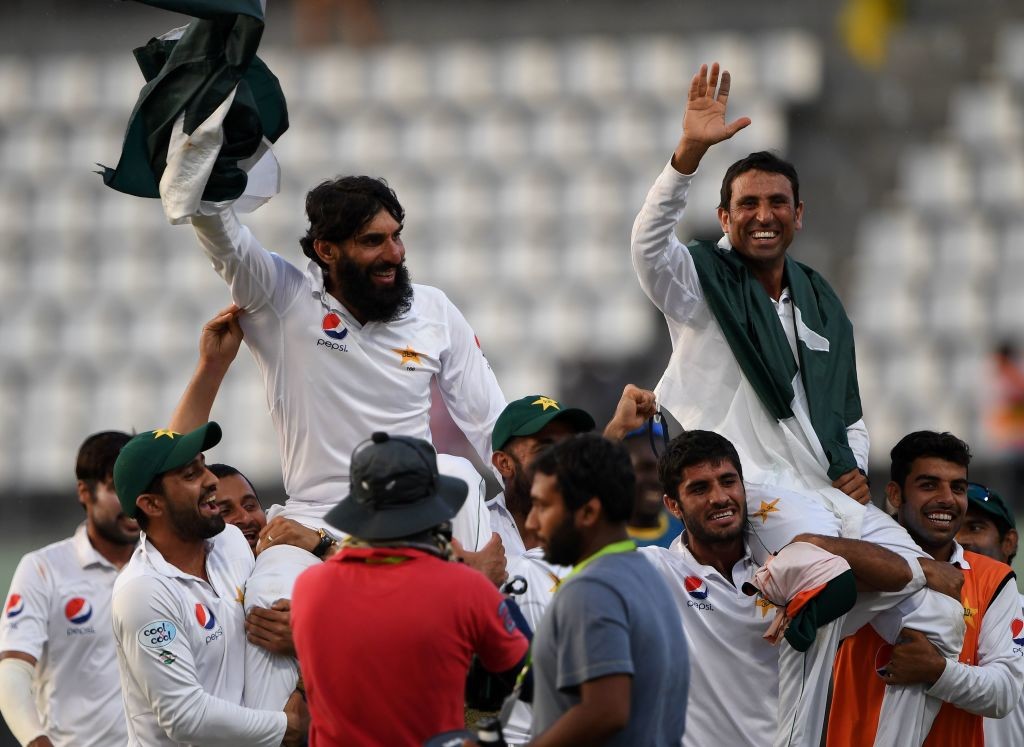 The void left by Misbah and Younis will not be filled so easily.

Azhar Ali, Babar Azam, Asad Shafiq and Sarfraz Ahmed have the potential to form a solid batting line-up for sometime in the foreseeable future.

The ingredients for a solid spine were all present and it was only a matter of giving the vessel a solid direction to start the new Test era.

However, two Tests later, it has all come crashing down for Sarfraz and him men.

When Wahab Riaz was dismissed by Rangana Herath on the final day of the Dubai Test, Pakistan relinquished its proud record in the UAE with its first ever Test series defeat.

It was the worst possible start for Sarfraz against an opponent which was given no chance by one and all before the start of the series.

The islanders have been the victims of failing to fill the void left by their Test stalwarts like Mahela Jayawardene, Kumar Sangakkara and Muttiah Muralitharan.

Pakistan move below Sri Lanka and into 7th place in the ICC Test rankings #Cricket pic.twitter.com/iJkRJtKStR

The side has struggled with transitional issues for the greater part of two years with a humiliating ODI series defeat at the hands of Zimbabwe signifying their decline.

However, it seems Pakistan have only to look at the recent plight of the islanders to understand what they face. Replacing over 15,000 Tests runs and just under 200 matches of experience in a short span is easier said than done as Sri Lanka have just realised.

It has taken the islanders’ humiliating thrashings and losses before they turned a page in Abu Dhabi and Dubai. Pakistan need not go through the same ordeals but the principals remain the same.

Experience is built over time and Rome wasn’t built in a day. Sarfraz Ahmed and co have a momentous task ahead in rebuilding the team but patience will be the basic necessity.

He has the ingredients at his disposal, nurturing them into the final product will come with time, and the odd shocker in between.

Kagiso Rabada can do no wrong as he emerges as South Africa's pac...