Memories of Australia's 1998 tour of Pakistan 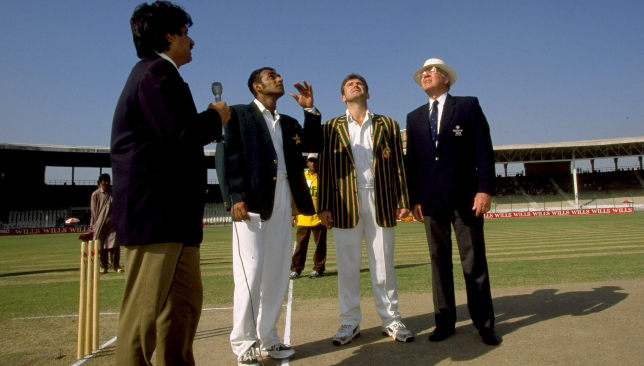 The year was 1998, a different time, a different world. US president Bill Clinton was caught up in the Monica Lewinsky scandal; Europeans agreed to have a single currency – the Euro; Titanic became the first movie to gross over $1bn at the box office and won a record-equalling 11 Oscars; Manchester United footballer David Beckham was red-carded in a World Cup match against Argentina that England subsequently lost, and let’s not forget this was the year the world was first introduced to that that funny-sounding search engine Google.

And if you’re a cricket fan, you’ll know it was also the last time the Australian cricket team toured Pakistan.

After the events of Sept 11, 2001 and the bomb attack the following year outside the Pearl Continental hotel in Karachi where the New Zealand team were staying, Australia decided they no longer felt safe in Pakistan. For the next 20-odd years they opted to play the fixture at neutral venues in places stretching from the UAE, to England and Sri Lanka.

Many unsuccessful attempts were made by various Pakistan boards to get them to resume touring, but the terrorist attack on the Sri Lanka team in March 2009 destroyed any possibility of that, turning Pakistan into a pariah cricket state where no international team was willing to play.

Now 24 years later the Australian team are back on Pakistan soil, albeit with presidential-level security, and still in a bio-secure bubble.

I’m not going to describe the intricacies of the current tour’s arrangements – my article is a nostalgic one. As it happens, I happened to be present in Karachi when Australia last played there, and for me it was an experience from start to finish.

Australia had just completed two Tests. In Rawalpindi, where the current series kicked off, the visitors thrashed the hosts by an innings and 99 runs. Michael Slater and Steve Waugh scored centuries as Australia amassed 513. Saeed Anwar’s 145 wasn’t enough to help the hosts in a losing cause. 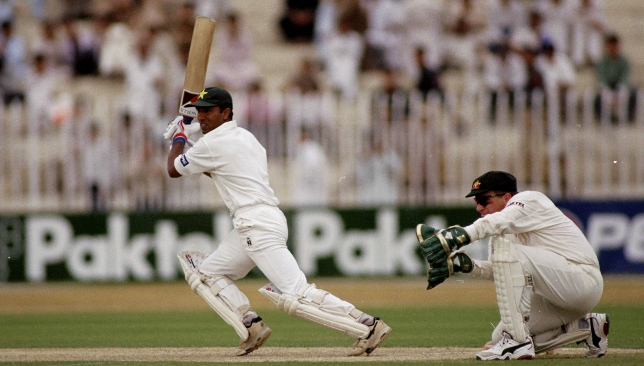 The second Test in Peshawar ended in a draw, though the game saw memorable knocks from Mark Taylor, who scored a mammoth 334 not out in the first innings and 92 in the second. Another century from Saeed Anwar still wasn’t enough for Pakistan to win, but did help force a draw.

The final match was in Karachi, but my journey started in Lahore. I was on vacation visiting relatives when I got a call from my dear friend Saqlain Mushtaq. Now ironically the head coach of Pakistan, he had been dropped from the side after the Rawalpindi Test, where he bowled 41 overs for 2 wickets and went for 112 runs. Saqlain had been recalled for Karachi, and in the interim had been playing for his domestic side, Pakistan International Airlines, to help regain some form. The opponents were Allied Bank, for whom another mutual friend of ours, Muhammed Akram, was playing.

That evening he invited myself and Akram around to dinner. We both made our way to the affluent area of Lahore known as Defense; in an auto-rickshaw we hired outside Akram’s hotel from the Gulberg area of Lahore. After covering half the city in a pre-GPS era, we twigged the driver had no idea where he was going. But we eventually arrived. While there and after consuming some wonderful Pakistani cuisine, Saqlain asked when I was heading out to Karachi. “Tomorrow,” I responded. “Oh great. Myself and Akram will accompany you –we have to meet up with the team prior to the Test. Though don’t go into the airport till we arrive.” “Why not?” I thought to myself.

Once they arrived outside the airport check-in area, an airport official emerged as if from nowhere, and stated that we were ready to board. “Board??? But we haven’t checked in yet.” “Oh you’ve already been checked in, sir, here are your boarding passes. My luggage was loaded alongside that of other Pakistan team officials who were also making the short 90-minute journey.

Once on the plane, the three of us were traveling in business class; my first time. My Test-playing travel companions were inundated by autograph hunters – and strangely I was also made to sign, reluctantly if I might add. Luckily for me, there is a former Pakistan player who shares his name with me. I still felt a bit of cheat with those poor kids and I hope having my signature won’t devalue any collectible autograph book in the future. 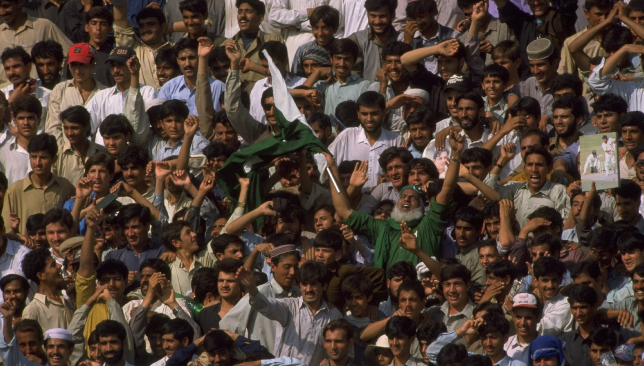 When it came to in-flight dining – one would expect some lavish treats in business class. Not the case I’m afraid, some paltry sandwiches with as much cheese as you’d find on a mousetrap, much to the horror of the players. They made the steward aware that they were to play Australia in a few days, so needed as much energy as possible– hence we were cordially invited to the galley to consume the crew’s food, which consisted of spinach, rice and meat, not forgetting rice pudding for dessert. I could definitely get used to this.

Upon arrival at Karachi my uncle was there to greet me, while the players were going to the team hotel. They asked us to come and stay with them later that evening, and that they would leave the hotel room open. I politely declined as I didn’t want any of them getting in trouble through having a friend in their room – though this was normal during this era, friends or relatives would be invited as guests to stay with players.

Next morning I met the team upon arrival at the National stadium where both sides were due to practice.

This was a first. I had seen the Pakistan team train in England, but to see them in Karachi was an experience. I was lucky enough to watch legends such as Inzamam ul-Haq and Waqar Younis, the former being hit on the toe from one of his fast-bowling compatriots and then carried out of the nets by two of his teammates. I viewed from a safe distance admiring the talent on display. What I hadn’t expected was a crowd of a couple of hundred kids who were allowed on to the barricaded stands, who turned out to be so rowdy that the coach Javed Miandad had them all expelled by the police.

I had to leave the metropolis for a few days – to visit my in-laws in interior Sindh, as you do – so was going to miss the beginning of the Test. Once back in Karachi, with the match underway, I was invited by Saqlain to come and watch the next morning, and he said he would collect me from the gate. “Just tell them I’m your cousin and they will call me down to the gate.” Thinking nothing of it, that’s exactly what I did, only to be told by the steward at the gate: “Sorry but everyone is his cousin.” Luckily, spotting an official from one of the major sponsors, I politely asked him if he could contact Saqlain, as he was 12th man. Saqlain came down in his whites and still wearing his spikes, with a group of people circling around him: “Why didn’t you say you were my cousin?” “According to them you have more than one cousin here!.” 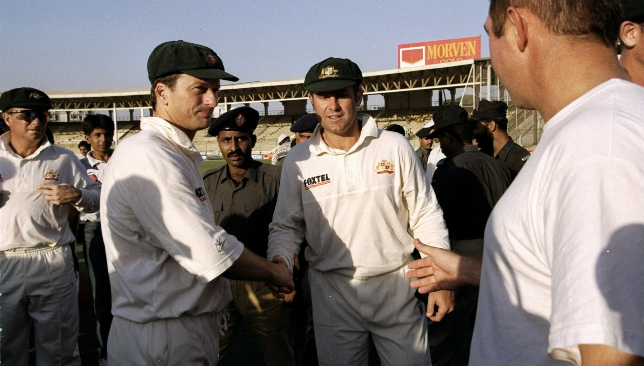 As I didn’t have a physical ticket to hand, there was the matter of finding a place for me to sit in the official guest area. First I was seated in the Karachi Cricket Association section, only to be abruptly kicked out for not having a ticket as soon as Saqlain left. Venturing down to the Pakistan changing room, I called on poor old Saqlain, who by now must have wanted to throttle me. This time he arranged for me to sit alongside the media and some Australian dignitaries. I was plonked alongside two hilarious Australian gentlemen, twins in their fifties, both of whom were singing some rather rude songs in the direction of Inzamam. Only some of us I’m sure understood the lyrics, including the ambassador sitting nearby.

During a small break I wandered downstairs to get some change for some food, when I bumped into Australian legend Allan Border, not only was he kind enough to provide me with some change, but we discussed a match I’d seen at Valentines Park in Ilford in England 10 years prior, when he was playing for Essex against a Sussex side which contained Imran Khan. He was impressed with my recollection of the square cuts he played against Pakistan’s future prime minister.

Once back upstairs and having watched the match, which in all honesty was turning out to be a rather dull affair, I was gratefully called to the Pakistan changing room by Saqlain. Whilst taking me there, he was once again inundated by fans wanting what would be described as a pre-cursor to selfies, this time with old-fashioned cameras. He was always great and very accommodating with the fans. In the changing room I was offered some food and was told that I could watch the game from here. Dr. Dan Kiesal, the team physio, also joined us in watching the game and he was kind enough to check out a dodgy Achilles I had picked up in a club match earlier that season. Whilst he was doing that Aamir Sohail the captain of the side walked in, having come off for a quick cigarette break. Luckily for me he didn’t mind that I was there. For one moment I thought I was going to be chucked out for a third time.

Saqlain kindly invited me back for the next day, but I politely declined. I hadn’t seen much cricket that day, and I don’t think I could go through that experience again.

Personally, as a fan and writer, along with millions of other cricket aficionados, I’m very happy that Australia have decided to tour Pakistan once again. And now Saqlain, 12th man for that last Test in Karachi, is Pakistan’s head coach and is part of this wonderful historic series. The tour is not only great from Pakistan’s point of view but is beneficial for world cricket itself. This time I won’t be watching from a media enclosure or sitting next to two middle-aged rowdy Australian brothers, but just from the comfort of my sofa back home in London, though my heart will be in Rawalpindi alongside with all the other genuine fans of this beautiful game.

At the time of writing, one of the greatest ever cricketers to grace the game, Shane Warne, has passed from this world. Shane wasn’t on the tour to Pakistan in 1998, but I was lucky and privileged enough to watch him play in England, as well as seeing him at media centres in grounds across the country.

Not only did he bowl the ball of the century, there is no doubt in my mind he was also the player of the century. There will never be another like him.