Jordan Spieth admitted memories of his Masters meltdown flashed through his mind as he brilliantly avoided a repeat performance to claim one of the most remarkable victories in Open Championship history.

Three shots clear of Matt Kuchar heading into the final round, Spieth found himself a shot behind after his fifth bogey of the day on the 13th, which involved a 20-minute ruling and playing his third shot from Royal Birkdale’s practice ground.

But the 23-year-old American somehow regained his composure to play the next four holes in five under par to card a remarkable closing 69 and finish 12 under par, three shots ahead of the unfortunate Kuchar, who also shot 69 after a bogey on the last.

What an incredible way to comeback and win. Many congrats @JordanSpieth

The victory means Spieth joins Jack Nicklaus as the only players to win three majors before the age of 24 and he can surpass Tiger Woods as the youngest winner of a career grand slam by claiming next month’s US PGA at Quail Hollow.

Spieth won the Masters and US Open in 2015, but squandered a five-shot lead with nine holes to play at Augusta National the following year.

“As you can imagine, thoughts come in from my last scenario when I was leading a major on Sunday,” said Spieth.

“We never mentioned it, but all of a sudden it creeps into your head. I was so confident and all of a sudden the wheels have kind of come off everything and how do we get back on track to salvage this round and just give yourself a chance at the end. It took a bogey to do so.”

That was a reference to one of the most remarkable bogeys seen in a major championship, a turning point in a final round which started with Spieth enjoying a three-shot lead which was wiped out in four holes.

Spieth bogeyed three of them and, although he was soon two clear again thanks to a birdie on the fifth and Kuchar’s bogey on the next, there was a two-shot swing on the ninth as Kuchar birdied and Spieth three-putted for the third time.

The biggest drama was yet to come, however, with Spieth dropping out of the lead for the first time in two days in extraordinary circumstances on the 13th.

After a wild drive into the rough, Spieth took a penalty for an unplayable lie, entitling him to go back in a straight line as far as he liked to find a favourable place to drop.

That turned out to be the practice range between the 13th and 15th holes and specifically a truck belonging to one of the equipment manufacturers, from where he could then get a free drop away from a temporary immovable obstruction.

Around 20 minutes after finding his ball, Spieth eventually hit his third shot short of the green, chipped to seven feet and holed out for an unlikely bogey.

Trying to work out how Jordan Spieth has only made a bogey after that unplayable... ? #TheOpen pic.twitter.com/wtiaQIYQVo

“If I was a very straight driver of the golf ball, I would have made a different score on that hole,” Spieth joked. “But having been in unplayable situations before, I just asked the question, is the driving range out of bounds?

“And I got the answer ‘no’ and thought that’s a much better location for me to hit the next shot because I can get it much closer to the green and it saves me almost a full stroke from going back to the tee.”

Spieth “apologised profusely” to Kuchar for the lengthy delay, but then rubbed salt into the wounds by almost holing his six-iron tee shot on the par-three 14th and tapping in for birdie.

“I knew we had momentum on our side and we were tied,” Spieth added. “And all of a sudden I felt and believed that I could win that golf tournament, when 30 minutes prior – and really the entire day after the fourth hole – I didn’t feel that way.”

A few minutes later Spieth holed from 45 feet for eagle on the par-five 15th and, although Kuchar made birdie there to fall just one behind, Spieth rolled in another putt from long range on the 16th and followed Kuchar in for birdie on the par-five 17th. 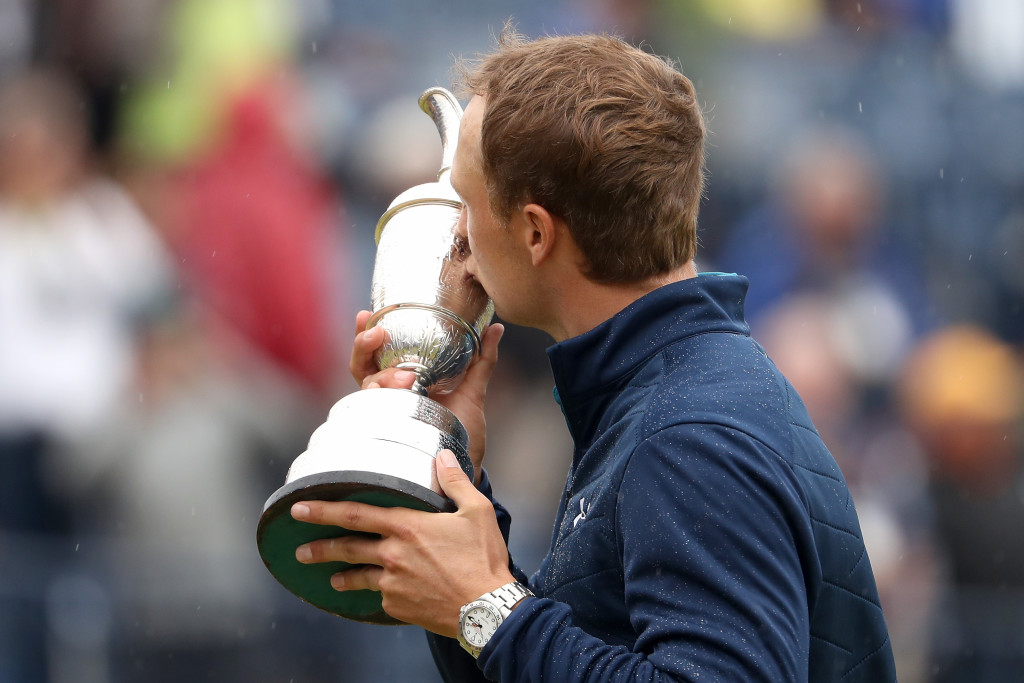 Kuchar, who admitted the loss was “hard to explain” and “crushing”, had the consolation of his best finish in 47 major appearances, with China’s Li Haotong three shots further back in third after equalling the lowest final round in major history with a closing 63.