The 23-year-old South African finished two shots ahead of England’s Lee Slattery after a thrilling final day at the Albatross Golf Resort to claim 166,660 points and jump from 105th to 61st spot in the European Tour’s Race to Dubai rankings.

The win marks Porteous’s first win on Tour since his maiden triumph last season at the Joburg Open.

The result sees his season tally swell to 425,551 points, placing him in prime position to qualify for the DP World Tour Championship, taking place at Jumeirah Golf Estates from November 16-19.

“To get my second European Tour win under the belt just feels amazing,” said Porteous, who brought his good form to the Czech Republic after securing his first top ten finish of the season last week at the Made In Denmark.

“To start to feel as if I belong, it’s a big step in the right direction and I need to just carry on doing what I’m doing.

“I’m trying to get myself within the top 60 to get into the DP World Tour Championship and move up the Race to Dubai rankings. I’ll be working as hard as I can to get into the last stretch of big tournaments.Hopefully I can do that – I just have to take it one tournament at a time.”

What a week!? Thank you so much to everyone involved this week! The sponsors, volunteers, my sponsors @uagolf @callawaygolfeu @titleistukireland #ACPI, and most importantly friends and family! #albatrossgolfresort thank you for the awesome memories! See you next year!? #mydna #kaizen #czechmasters #5thmajor

Porteous came in to the final round of the D+D REAL Czech Masters two shots adrift of overnight leader Slattery but erased the deficit in a hurry as he birdied his first two holes of the day.

In the end, the man from Johannesburg carded half a dozen birdies during his final round as he signed for a closing 69 to get to 13 under par and prevail over Slattery by two shots.

Slattery’s runner-up finish at the D+D REAL Czech Masters earned him a healthy tally of 111,110 points. He now leapfrogs from 107th to 74th place in the Race to Dubai Rankings with a season total of 425,551 points. The Englishman is now only a few good finishes away from securing his place in November’s season finale.

Meanwhile Tom Lewis and Pontus Widegren picked up a much-needed 56,300 points each as they finished tied for third place to put themselves in a position to attempt a late charge up the Race to Dubai rankings. Lewis moves to 130th while Widegren is now in 156th spot.

Another man who improved his chances of qualifying for the season finale at Jumeirah Golf Estates was England’s James Morrison. He jumped from 94th to 87th in the Race to Dubai rankings after finishing tied for fifth in the Czech Republic.

Eddie Pepperell also made strides up the Race to Dubai rankings with his tied fifth place finish. He’s now in 89th place after picking up 33,100 points to take his season tally to 313,578.

Both Pepperell and Morrison will be aiming for a strong finish to the season in order to book their tickets to Dubai in November.

Englishman Tommy Fleetwood remains at the head of the rankings with 3,771,122 points, whilst Spaniard Sergio Garcia is in second with a season-tally of 2,799,255 points and his young compatriot Jon Rahm sits in third spot on 2,761,857. 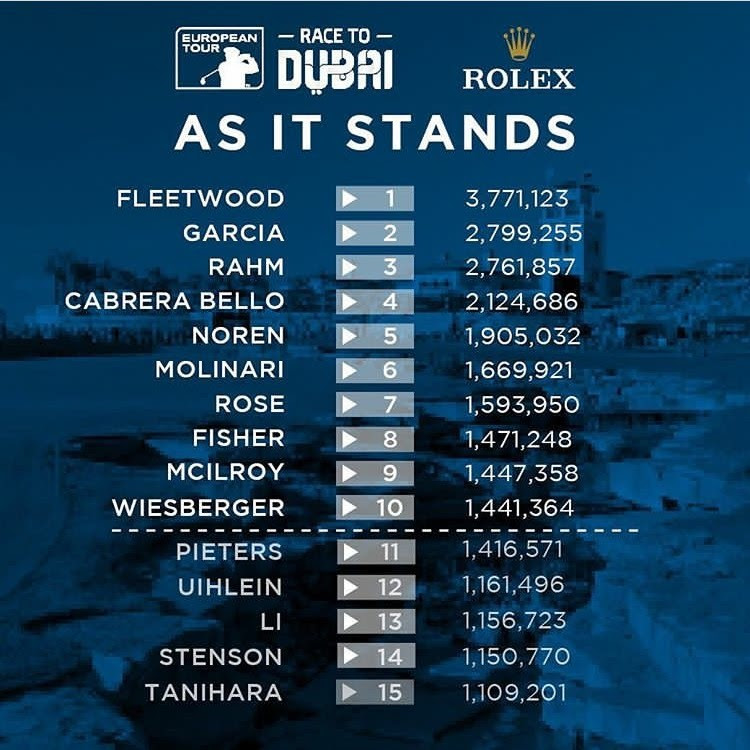 Tiger Woods had five different drugs in his system when arrested ...