Wattel is now in a prime position to qualify for Dubai.

Romain Wattel is one step closer to securing his place in the season-ending DP World Tour Championship, Dubai, after winning his maiden European Tour event at the KLM Open.

The 26-year-old Frenchman, who is a Dubai resident and practices at Jumeirah Golf Estates European Tour Performance Institute, finished a shot ahead of Canada’s Austin Connelly on a lively final day at The Dutch in Spijk to claim 300,000 points and jump from 130th to 55th spot in the European Tour’s Race to Dubai rankings. The win comes on the back of 25 top-ten finishes in his previous 186 events.

Nick Tarratt, Director of the European Tour International Dubai office, said: “We congratulate Romain on entering the winner’s circle on the European Tour for the very first time, continuing a fantastic run of Dubai based winners this season which has also included Alvaro Quiros and Rafa Cabrera Bello.

“With the Ryder Cup being played in France next year, it would be fantastic to see a Frenchman make it in to the European team. We wish Romain all the best in his quest to qualify for the season finale in November and for The Ryder Cup next year.” 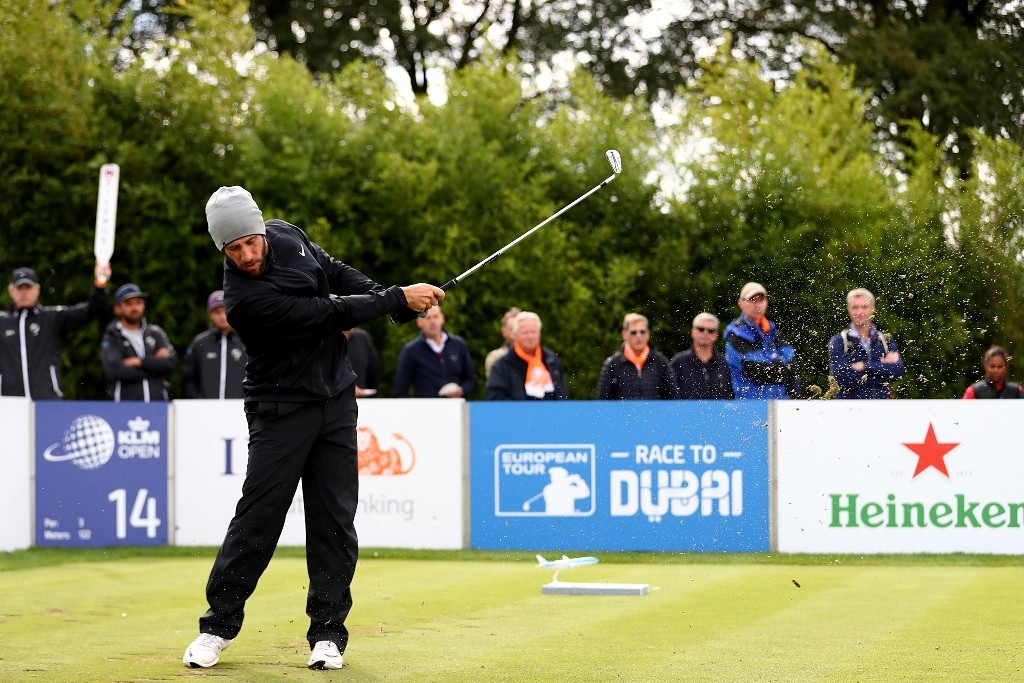 Wattel hits off the tee in tough conditions.

Wattel came in to the final round of the KLM Open one shot behind Thailand’s Kiradech Aphibarnrat. However, a fiery start from the Frenchman which included three birdies in his first six holes saw him take the lead.

Once in front, he stayed in control for the majority of the final round and managed to survive a late scare when he missed the green with his approach to the last. However, a delightful up-and-down on the 72nd hole saw him sign for a closing round of 69 to end on 15 under par, one ahead of Connelly.

“I am happy with the way I played all week,” said Wattel, who has not finished higher than 24th in the Race to Dubai rankings. “It’s been a very nice weekend. I’ve been putting really bad the last two years – I think I’m a really good putter but the last two years were tough for me.

Connelly’s lone runner-up finish at the KLM Open earned him a healthy tally of 200,000 points. He now leapfrogs from 123rd to 71st place in the Race to Dubai rankings with a season tally of 407,890 points. The 20-year-old Canadian, who impressed at this year’s Open Championship at Royal Birkdale, is now only a few good finishes away from securing his place in November’s season finale.

Meanwhile George Coetzee and Eddie Pepperell picked up a much-needed 73,500 points each as they finished tied for third place with Wattel’s fellow Dubai resident Sebastian Heisele, Lee Westwood, Justin Walters and Joel Salter to put themselves in a better position to break into the top 60 in the Race to Dubai Rankings. Coetzee now moves to 64th while Pepperell is in 75th spot.

There was also movement on top of the Race to Dubai as Bernd Wiesberger’s top ten finish in the Netherlands saw him surpass Rory McIlroy for ninth spot in the rankings. The Austrian collected 33,876 points at the KLM Open to take his season tally to 1,475,239.

However, Englishman Tommy Fleetwood still remains at the head of the rankings with 3,771,122 points, whilst Spaniard Sergio Garcia is in second with a season-tally of 2,799,255 points and his young compatriot Jon Rahm sits in third spot on 2,761,857.

Click here for the full 2017 Race to Dubai Rankings presented by Rolex.