Can Hatton secure a Dubai place?

Tyrrell Hatton made a timely charge in the Race to Dubai as the countdown to the season-ending US$8 million DP World Tour Championship, Dubai begins after becoming the first man to successfully defend the Alfred Dunhill Links Championship.

The 25-year-old Englishman carded a flawless final round 66 to finish three shots ahead of fellow countryman Ross Fisher at the Old Course, St Andrews to claim 676,132 points and take himself from 33rd to 11th place in the European Tour’s Race to Dubai rankings.

The result sees Hatton’s season tally swell to 1,452,782 points, positioning himself nicely to secure a top ten berth going in to the DP World Tour Championship which takes place at Jumeirah Golf Estates from November 16-19.

Hatton came in to the final day of the Alfred Dunhill Links Championship with a healthy five shot lead but experienced an early hiccup when he put his approach on the opening hole in to the Swilcan Burn. However, a superb chip in for par after taking a drop saw him start a golden run on the front nine as he went on to birdie the next four holes to open up a seven-shot lead over the field.

In the end the man from Buckinghamshire held off an impressive late charge from Fisher to finish on 24 under par. 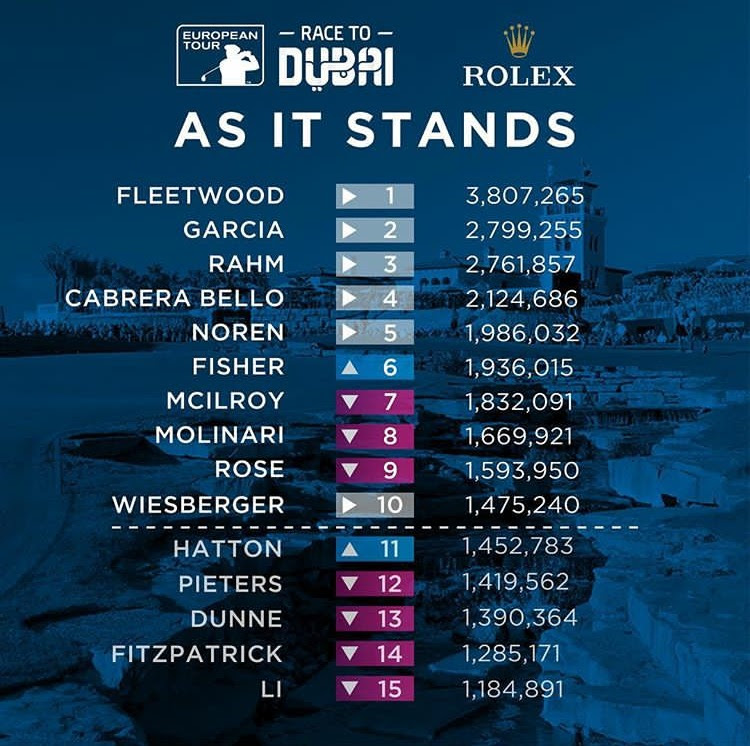 “It’s an unbelievable feeling,” said Hatton, who becomes just the fourth man after Curtis Strange, Trevor Immelman and Thongchai Jaidee to successfully defend a trophy for his first two wins.

“It felt so much harder than last year, maybe that’s just a bit more pressure on myself but I’m so happy that I managed to defend it and what a great week again.

“I think the format is helping me, playing with Jamie (Dornan) we had good fun out there and it sort of keeps me relaxed which is what I need to do. We’ve just had good fun, I think that is what this tournament is about.”

Runner-up Fisher also wrote his name in to the history books on the final day at St. Andrews as he broke the Old Course record with a blistering round of 11 under par 61. The result sees him move from ninth to sixth in the Race to Dubai rankings as he picks up 450,752 points to improve his season-tally to 1,936,014.

Meanwhile Victor Dubuisson’s third place finish in Scotland means he’s now only one good finish from securing his place in next month’s season finale. The Frenchman picked up an invaluable 253,955 points to jump from 122nd to 63rd spot in the Race to Dubai rankings.

His fellow countryman Grégory Bourdy also did his chances of securing a spot among the Race to Dubai’s top 60 on the Earth course at Jumeirah Golf Estates by finishing in a tie for fourth at the Alfred Dunhill Links Championship. The result means he now moves from 90th to 62nd place with a season tally of 521,453 points.

A top five finish for Scotland’s Marc Warren sees him break in to the top 60 in the Race to Dubai rankings. He’s now in 56th spot after picking up 172,278 for his tied fourth place finish.

Another man who also made significant strides up the season rankings is Robert Rock. The Englishman also finished in a tie for fourth to pick up 172,278 points and catapult himself from 102nd to 66th in the Race to Dubai rankings with a season tally of 498,209 points.

However after an outing which included a course record 63 at Carnoustie, it’s still Englishman Tommy Fleetwood who remains at the head of the rankings with 3,807,265 points, whilst Spaniard Sergio Garcia is in second with a season-tally of 2,799,255 points and his young compatriot Jon Rahm sits in third spot on 2,761,857.