Darren Clarke described young Rayhan Thomas “a huge talent” after the MENA Tour prodigy fired a magical 10-under 61 highlighted by world record-equalling nine birdies in a row in a stunning display of golf in the second round of the Dubai Creek Open on Tuesday.

That incredible run of birdies, starting from the second, ignited his challenge of winning back-to-back titles as he ended the penultimate day at 11-under, just two shots behind MG Keyser, who followed his record-breaking 61 with a 68 to keep his nose in front.

England’s Robert Harrhy occupied solo third on nine under, a good three shots clear of Peter Stojanovski of Australia and Todd Clements of England as 2016 European Ryder Cup captain Clarke moved into a four-way tie for sixth on five-under after a second-round 69.

Supremely accurate off the tee and clinical with the putter, Thomas hardly put a foot a wrong on his home course as he strung together a dream round to match the world record for most consecutive birdies in an Official World Golf Ranking event made by American Mark Calcavecchia at the 2009 RBC Canadian Open.

Austria’s Bernd Wiesberger also fired nine consecutive birdies in the second round of the 2017 Maybank Championship in Malaysia, but it was not recognized as preferred lies were in force at Saujana Golf and Country.

Thomas’ flawless round, which also equalled the Dubai Creek course record set 24 hours ago by Keyser, had a special ring to it as it was achieved in the company of none other than 2011 Open champion Clarke, who is also the MENA Tour patron. 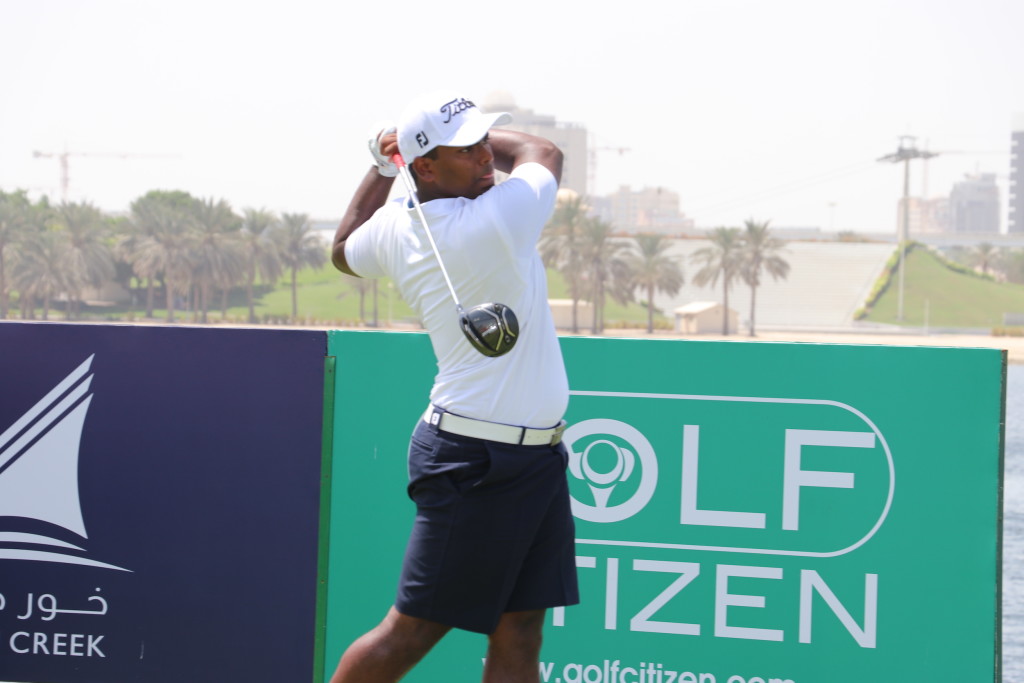 “Rayhan is a huge talent, obviously. He played beautifully, hit the ball very close and putted nicely. The way he was playing, this is the worse he could have shot,” said Clarke. “He was very calm and composed and read the greens very well, which I couldn’t!

“Rayhan’s game is trending in the right direction and I think he has a great future of ahead of him. I wish him the very best,” said the Northern Irishman.

Thomas, 17, attributed his brilliant effort to what he called smart golf. “I don’t think it was my best round ever, probably one of the best. I just wanted to avoid silly mistakes and make as many birdies as I could.

“My target was to shoot six or seven under, but when I started holing putts, I knew it’s going to be my day. Score-wise, it was. I am really happy with 10-under. I think I played very smart golf out there,” said Thomas, who will be featuring in the Presidents Cup later this month.

“It’s good to get a good round under my belt and get my rhythm going. It shows I have what it takes to go low. Hopefully, it’s going to be a good memory to fall back on,” said Thomas who had his chances to break 60, but narrowly missed mid-range birdies putts on the last two holes.

And a well-deserved hug from mum after a super 61 for @RayhanThomas pic.twitter.com/d1QOs6Ro8L

Meanwhile, South African Keyser, who is based in Dubai, mixed four birdies with a lone bogey on the 17th to stay in stay in prime position for a breakthrough win on the MENA Tour.

Elsewhere, England’s Zane Scotland, a two-time winner of the Dubai Creek Open, was forced to withdraw to due to a bad back as the 36-hole cut was made at three-over-par 145 with 44 professionals and 11 amateurs making it to the final round.