With the trophy: Elson.

Jamie Elson won the inaugural Ayla Golf Championship in a tense playoff on Saturday, holing a four-foot birdie putt on the second extra hole to beat fellow Englishman Luke Joy in an exciting finish to the first professional golf event in the country.

Elson, the current MENA Tour Order of Merit leader, eagled the final hole in regulation en route to a closing 68 to set the clubhouse target of a seven-under-par 212 that Joy matched with a 72, birdieing the last after producing a stunning hole-in-one on the 12th.

Both birdied the first extra hole to extend the proceedings, but a wayward drive by Joy opened the door for Elson to secure his breakthrough win on the MENA Tour he first played last year.

Scotland’s Robert MacIntyre fired a sizzling nine-under 64 to set a new course record, eclipsing a 67 shot by Sweden’s Henric Sturehed in the second round to move into a four-way tie for third on six-under after an action-packed day.

England’s Joe Heraty, who carded a bogey-free 68, Italy’s Rocco Sanjust (67) and Sturehed (73) joined MacIntyre in the group, four clear of the English duo Zane Scotland and Lee Corfield and Sweden’s Fredrik From.

“Quite surprised to win, to be honest. Struggled a bit on the front nine, but made a nice birdie on the ninth to get to level-par for the day. Thereafter, I played solid golf and holed putts when I needed to, to get into the playoff,” said Elson after receiving the winner’s trophy from HE Nasser Sultan Shraideh, Chief Commissioner, Aqaba Special Economic Zone Authority.

“Playoff could have gone either way, but I hit some great shots and made putts to get the job done, finally,” said the 36-year-old Englishman, eagled the last in regulation, hitting his eight-iron approach from 185 yards to with two feet. 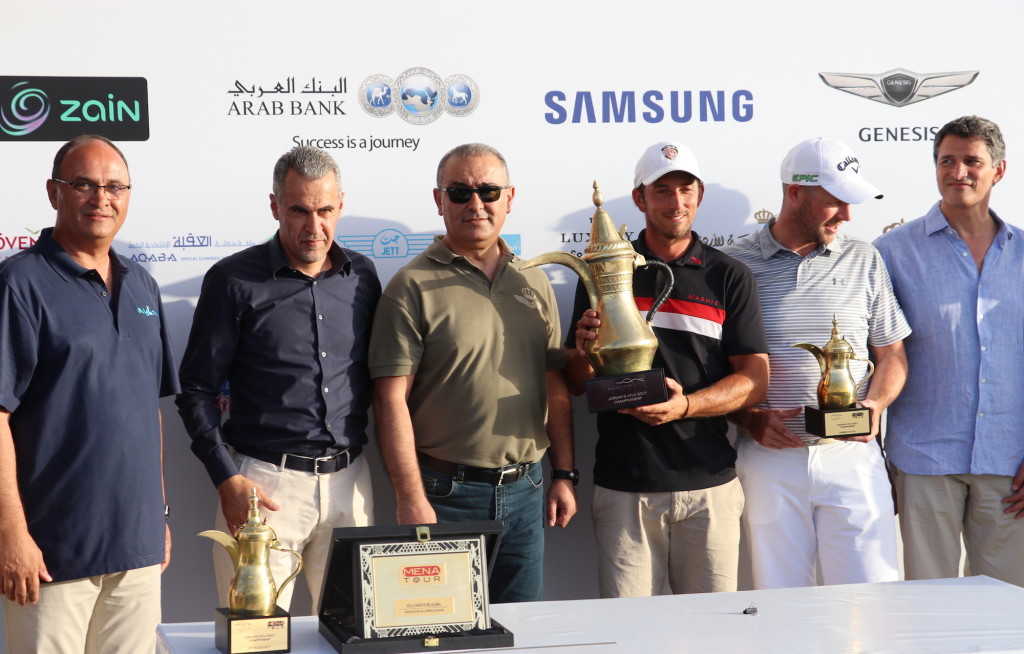 Elson closed on a final round 68.

Scotland’s MacIntyre, tied for 15th at the start, produced the round of the tournament to make his professional debut an event to remember.

“I was far off from the field after a disappointing 78 in the opening round and had nothing to lose. Played a bit aggressively and that approach paid off,” said the Scotsman, who eagled the final hole after hitting his nine-iron approach from 168 yards to within nine yards.

“I can always take a lot of confidence out of the last two bogey-free rounds, a lot of positives,” said the 21-year-old, who hails from Oban, a resort town within the Argyll and Bute council area of Scotland.

England’s Todd Clements, the first round joint leader with Joy, closed with a 72 to share the honours with Michael Harradine of Switzerland in the amateur division after both finished on one-over-par 220, well ahead of Saudi Arabia’s Othman Almulla and Jordan’s Shergo Al Kurdi who tallied matching 13-over for the tournament.

England’s Mark Chamberlain also had something to cheer about as he aced the 179-yard, par-3 16th with an eight-iron for his first hole-in-one since turning professional in 2011 — and the fifth overall — as he finished tied 47th.

The MENA Tour will travel to Kuwait for the Sahara Kuwait Golf Championship to be held from October 16 to 18, the last event on this year’s schedule before the field whittles down for the 72-hole Tour Championship hosted by Al Zorah Golf Club in Ajman from October 23 to 26.