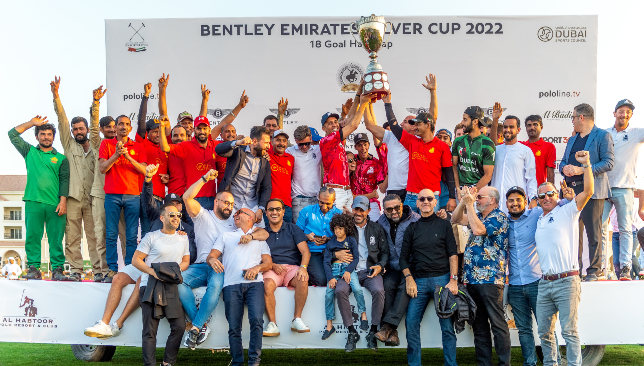 The last piece of the action at the Silver Cup tournament of the Dubai Polo Gold Cup Series showcased a spectacular finish at Al Habtoor Polo Resort and Club.

Alfredo Cappella opened the afternoon with a penalty shot for the Wolves. The team owned the first chukker as Carlos Ulloa and Capella closed it at 3 goals to 1.5. The next chukker didn’t see much of Bangash Dodson & Horrell as it ended with a significant lead for the Dubai Wolves by CAFU. It was raining goals during the third chukker. Bangash Dodson & Horrell made an aggressive comeback and the Wolves showed an equally strong defensive play.

The Dubai Wolves by CAFU still had its advantage by halftime. The next chukker rolled and Federico von Potobsky stole the lead only to be defended by Ulloa that kept the narrow advantage of a half a goal. in favour of the Wolves It was a fight for the win at the final chukker, with the Wolves giving it their all. However, Benjamin Panelo ensured that the two goals he delivered were enough to earn their claim at the Hildon Cup trophy.

The Silver Cup tournament contenders last year met again at today’s final.  Mohammed Al Habtoor, Patron of the Habtoor Polo team, nicked the first goal of the game. UAE Polo’s Tommy Beresford and Lucas Monteverde Jr. ensured the lead was on their side at the end of the first chukker. Habtoor Polo crept its way back into the scoreboard by halftime and the teams were tied by the end of the penultimate chukker. The determining chukker had spectators witness a notable save from Matias Gonzales for the Habtoor Polo team and a penalty shot from Bayugar that the opponent couldn’t match. The game ended with a final score of 9 goals to 7 and Habtoor Polo proudly lifted the Silver Cup trophy of the Dubai Polo Gold Cup Series for the second year.

Martin Pedersen, Chairman of International Free Zone Authority presented the trophies for the teams at the Hildon Cup. The Best Playing Pony was Inunciado ridden by the Most Valuable Player of the tournament – Bautista Bayugar.