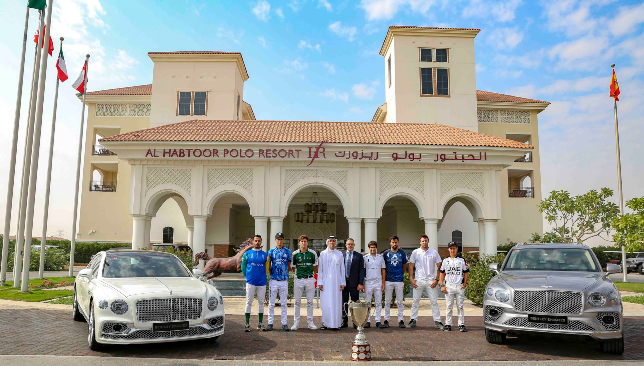 The Dubai Polo Gold Cup Series (DPGC) marked the start of its high-goal season with a press conference and live draw for the Bentley Silver Cup 2022 tournament at the Al Habtoor Polo Resort.

Mohammed K. Al Habtoor, founder of the Dubai Polo Gold Cup Series and patron of the Habtoor Polo team, said: “We are excited to host another high-goal season and I have pleasure of welcoming the seven competing teams in this tournament. I am grateful to see the enthusiasm from the teams and the continued support of sponsors and partners.”

He added: “This season, we welcome Clinova Polo as a new joiner, and AM Polo team in their return to the big league. Polo fans can expect new faces on the fields as the team patrons have taken on a new roster of players. It’s a whole new game and I am excited to see how the tournament plays out. It’s hard to predict which team gets to take home our prestigious trophy.

“As the newly appointed Chairman of the UAE Polo Federation, I aim to ensure that the game we love and have cultivated for over a decade continues to strive in the future. The next step is to develop a new generation of passionate polo players in the UAE. A consistent schedule of tournaments ranging from low to high-goal will encourage the youth in the Sport of Kings to join the well-established teams and clubs in the fun.”

Joseph Tayar, General Manager of Bentley Emirates, said: “Our association with Polo, the sport of kings, has been longstanding and we always look forward to the new season. We are delighted to be the title sponsor of the 2022 edition of the Bentley Silver Cup. This tournament is a great opportunity for us to celebrate the fantastic year we had with outstanding results for 2021 across all business verticals at Bentley Emirates and showcase the latest models.”

The final of the Bentley Silver Cup will be on February 5th, 2022, on the grounds of Al Habtoor Polo Resort and Club.

The Bentley Silver Cup 2022 is played under the banner of Hurlingham Polo Association (HPA), with strict international supervision according to the HPA rules and provision of its umpires. The tournament falls under World Polo Tour’s WPT Cup Category with winners being awarded by 60 points, finalists with 30 points, semi-finalists with 15 points and the rest of the players with eight points.