Luke Stevenson feels Abu Dhabi Harlequins may take a bit of time to hit their stride this season but he thinks they still possess a squad capable of adding to the incredible five-trophy glut of 2016/17.

Their historic haul all started with Champions League silverware 12 months ago. And even though fly-half Stevenson expects Quins to come under fire from the likes of a resurgent Dubai Exiles, Jebel Ali Dragons and tomorrow’s opening Champions League opponents Bahrain, he insists his team remain strong.

“We’ve got a good set of lads so hopefully we’ll go alright. I think a few other teams are looking really strong this year, so we’ll just see how we go,” said Stevenson with cautious optimism.

He has a right to be cautious. Not only was Quins’ incredible quintuple unprecedented, but their summer has been littered with financial issues off the field, while key trio Brian Geraghty, Willie Umu and Patrick Jenkinson have all departed to follow new paths.

Crafty centre Geraghty and all-action flanker Jenkinson were Quins’ two standout stars last term, while Stevenson knitted most of everything good the club did on the field together.

And with the majority of players only recently returning to the capital city following their summer breaks, Stevenson feels it might take a while for the Zayed Sports City men to get up to full speed.

He added: “The boys are looking good, we’ve got big numbers down at training but we’ve had the majority only get back in country in the last week or so, so we haven’t had much time together.

“There’s been a good core about over the summer but lads have just been coming back gradually, as I said we’ve only had a full set here the last week or so.

“I’m expecting Bahrain to be decent so we’ll see how it goes (tomorrow).” 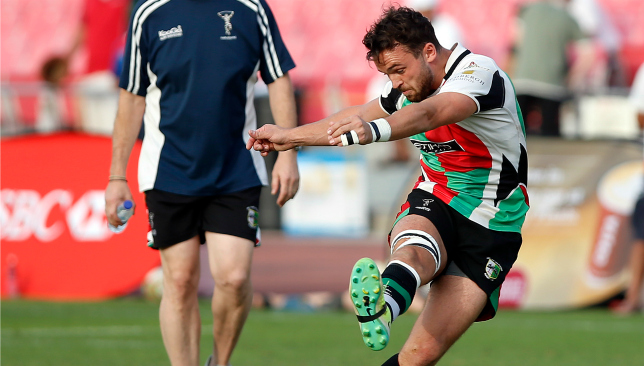 Luke Stevenson knows teams will be gunning for Quins this season.

The Champions League is essentially a pre-season warm-up and Quins coach Mike McFarlane, like counterpart Louie Tonkin, will be using it to test combinations and player fitness – but that will not mean glory is sacrificed.

“It’s great to be back and we’ve got tremendous numbers and competition for places across the club,” said an upbeat McFarlane.

“The games will be a fantastic opportunity for the players to gain minutes and practice putting our patterns and systems into play whilst players push to secure a jersey for the opening West Asia Premiership game.

“We will look at players playing in different positions and combinations whilst striving to perform at the highest possible level at this stage of the season.”

UAE rugby powerhouses get new season off to a flyer