Craig Nutt expects both Abu Dhabi Harlequins and Bahrain to be among the teams challenging for honours this season after the two played out an enthralling Western Clubs Champions League opener on Friday.

The curtain for both Asia Rugby’s cross border pre-season tournament and the UAE rugby season was raised in breathtaking style with both sides sharing 10 tries at Zayed Sports City.

Quins were 15-0 down inside 20 minutes, then scored 31 unanswered points to take control of the game, before Bahrain barged back into the contest with three tries inside the final minutes as Quins scraped home 36-32.

The fast-paced and physical nature of a game meant to act as a pre-season runout is an indication both teams will be among the leading clubs in 2017/18, according to Quins prop Nutt.

“I’d like to think (the closeness of the result and performance of both sides) shows these two teams will be up there challenging for titles this season,” said Welshman Nutt, signed from cross-city rivals Saracens in the summer.

“We were expecting Bahrain to be good and they were dogged. I know Louie (Bahrain coach Louie Tonkin) from back home and I knew he would have them organised, he’s a good coach. 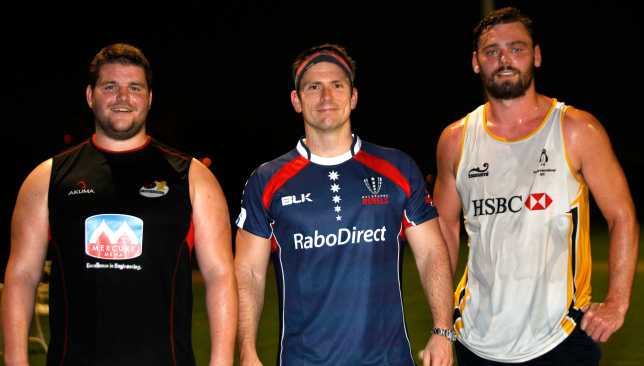 Craig Nutt (l) is relishing challenging for titles with Quins

“Obviously (Dubai) Exiles have recruited well this summer and (Jebel Ali ) Dragons are no mugs. If you don’t turn up and play well in this league you’re going to lose, it doesn’t matter who you’re playing against.

“There’s even some teams in the Conference that, if you don’t play well against you’ll lose to, so that says how much rugby has progressed in the three years I’ve been here. It’s progressed every year so you have to have a recruitment policy or you are going to fall behind.”

Nutt is enjoying life with the city’s oldest club and is relishing getting back to fighting for titles after two seasons of struggle at Al Ghazal. Sarries enjoyed a phenomenal 2014/15 – Nutt’s debut season in the Emirates – as they beat Doha to lift the West Asia Championship.

But they could not repeat the success as Exiles dominated 2015/16, while they really struggled last season – finishing bottom of both the West Asia Premiership and UAE Premiership.

Nutt said Sarries will always be a special place for him but he’s comfortable in his new surroundings.

“The set-up is more like what I’m used to back home. Everyone’s training and if you’re not, you’re not going to play,” said Nutt, who also hopes to force his way into Apollo Perelini’s UAE plans at the end of the season.

“It’s more professional. And that’s not taking anything away from Sarries. It’s a young club and I wish them all the best, there’s no hard feelings from my end and I hope there’s none the other end.

“They were a big part of my life but everyone moves on and now I’m a part of this club, and I’m going to work hard here too.”

Craig Nutt cools fury over move across Abu Dhabi from Saracens to...