The head of UAE rugby has warned that the future of the Emirati rugby is in a precarious position even though the number of local players taking up the game continues to swell and has even resulted in an additional team being created for this season.

UAE Shaheen head into their third competitive season in the Community League having built up solid experience in their opening two campaigns, while the hunger for rugby among locals is so demanding, a second team has been established.

Shaheen are sure to gain plenty of experience by being exposed to other Gulf countries this year, playing in the Gulf Conference, alongside Muscat, Bahrain 2nds and Kuwait.

“We have a lot of players and the players and coaches asked for this. They want to play more games so we open more doors for them. Two teams suggests numbers are growing. They played last week v Muscat. In the training sessions we have lots of players.

Yet, all is not well. Swelling numbers also brings its own problems, with indigenous players seeking financial gain by continuing along the Shaheen Player Pathway Programme (PPP). 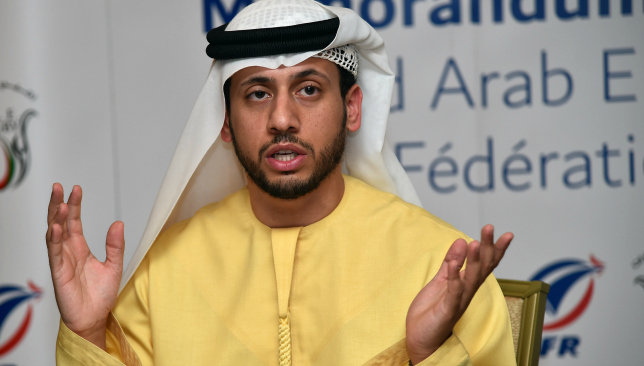 “There are many excuses by the Emirati players and it’s a big challenge to retain them and keep them interested because of soccer, which is not doing any good for other sports,” added Al Dhalai.

“They are offering players money and retainers, but other sports don’t offer that. Rugby is one of the sports players are asking for financial benefit from and we don’t want to go down that route.

“Our idea is that we need to ignite the love of the sport in these players. If we go down the route of subsidising and paying them, where’s the passion and love?

“We can sustain it now but not in the future. In our pool of 50 players currently we could afford to pay them, but what about the future when the numbers grow into the thousands?

“It’s not our priority. We opened the door for them to play in the Gulf Conference and we are pleased by the turnout in training and matches. This is not our way to run the organisation, we will never go that way, because if we do we will lose, we will fail one day.”

Perelini predicts UAE Shaheen side will improve as season progres...

Mixed fortunes for national team and Shaheen in Chennai 7s

In addition to the success of bringing players through via the PPP in recent years, Al Dhalai added that an ‘Elite’ group has also been created this summer, aimed at further developing the cream of the crop among emerging Emirati talent.

It is encouraging that among the swathes of local players, there are enough being picked out as superior talents, which will aid the prospects of Emiratis establishing themselves under UAE head coach Apollo Perelini at senior national team level.

It is the idea of the ‘Elite’ group to feed into UAE Shaheen and the national side,” said Al Dhalai.

“Shaheen has an age group from 18 all the way to 32. The Elite is mainly players 18/19-years-old to feed the national team youth levels, Under-18 to U20 and when they grow they can play for the seniors later on.

“The Elite is the concentrated group of players that Apollo can train for the UAE. It’s a bit higher than the PPP.

“The players who are graduating from the PPP are good players and are staying with us. The proof is that the players in the programme for the last three or four years are still enjoying it. Some new players are leaving but some are staying.”