Nadal must learn to survive without his uncle

Toni Nadal dropped a bombshell last week when he told an Italian publication that this will be the last season he travels with his nephew Rafael Nadal to tournaments on tour.

What made it an even bigger shock is that the Rafa camp – namely the world No6’s media manager Benito Perez-Barbadillo – said that the news had taken them by surprise.

Toni explained two reasons behind his decision: The first is that he wishes to return to his roots and focus on moulding the future generation of tennis talent via the Rafael Nadal Academy; and the second is that he felt that his decision-making scope has diminished over the years with more and more people getting involved in Rafa’s career.

That is a very surprising revelation considering Toni has always seemed at the forefront of Team Rafa and has been the key figure in his nephew’s life since he was a child. Rafa said that it is Toni who called up Carlos Moya end of last year to see if he would like to join the team as a third coach, alongside himself and Francis Roig.

Was this Toni’s way of phasing himself out of Rafa’s travelling circus? Rafa had repeatedly said in the past that he would never choose to part ways with his uncle, but that he expects Toni to leave him someday because his children are getting older and he would want to coach them himself and spend more time with them. 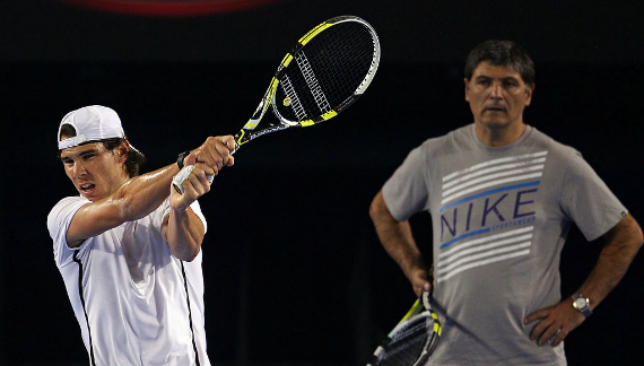 Irrespective of the core reason behind Toni’s decision to step aside next season, the fact remains that such a change will have a massive impact on Rafa, who has spent his entire career being shaped by his uncle.

Travelling to the major tournaments with Moya and Roig is not the same as having Toni in his corner. And for someone who is as meticulous and controlled as Rafa – let’s not forget his bottle-placing obsessions on court and his pre-serve habits – this will require quite a fair bit of adjustment.

Roig has been working with Rafa for years but Moya, who is an old and close friend but a new addition to the team, has only one year of experience under his belt as a coach, having been part of Milos Raonic’s crew last year alongside Riccardo Piatti.

While Raonic enjoyed his best season to date in 2016, it’s unclear how much of that success can be attributed directly to Moya, and not Piatti. Still, you get the sense that perhaps a drastic change for Rafa is just what he needs to try and recapture his grand slam-winning form.

We’ve seen how having a fresh voice has done wonders for the likes of Novak Djokovic with Boris Becker, and Roger Federer with Stefan Edberg. Federer’s partnership with Ivan Ljubicic, alongside Severin Luthi, also appears to be a killer winning formula considering the Swiss has just won the Australian Open with the pair in his corner.

The good thing about Moya is that he gets along great with Rafa, who grew up admiring his fellow Mallorcan. The Rafa clan are a tight-knit bunch and Moya feels like the one person who can be welcomed by the group with open arms, due to his close ties to the 14-time grand slam champion and their common background.

The key thing moving forward would be for Rafa to trust Moya and Roig in the absence of Toni. The 30-year-old can still improve technical aspects of his game and the only way to do that would be to have complete faith in all members of his team.

Toni’s comments hinted at a certain level of discontent from the 55-year-old and the next few months will reveal whether that will have ripple effects within the group or not. It’s important for any athlete not to view their careers as dependent on one person and even though Toni has been the architect of Rafa’s career, the Spaniard must learn to believe he can survive without his uncle.

While Toni is still likely to be involved from afar, the day-to-day for Rafa will significantly change and the sooner he embraces that, the sooner he can reap the rewards. It may seem like the end of an era but it’s definitely not the end for Rafa.

When national anthems at sporting events have gone wrong

WATCH: How many racquets does Federer get through?