It’s the 17th edition of the women’s Dubai Duty Free Tennis Championships and we finally have an Arab player fight her way through the qualifying rounds to earn a place in the main draw.

Tunisian Ons Jabeur has long been a beacon of hope for the Arab world on the WTA tour, ever since she won the Roland Garros girls’ title back in 2011, and the region has been anxiously waiting for her to leave her mark on the women’s circuit.

On Saturday, she qualified for the Dubai tournament and features in the main draw of the Premier 5 showpiece for the first time on Sunday.

Transitioning from juniors to the WTA has been challenging for the 22-year-old but so far this season, Jabeur has provided plenty of signs that she is finally ready to live up to her potential.

She has won 11 matches in 2017 – including qualifying rounds – and reached the quarter-finals in Taipei earlier this month where she held four match points against world No.13 Elina Svitolina to make the semis.

She was unable to convert any of them but showed the world, and most importantly herself, that she can play at that level.

Perhaps that match carries further meaning considering Jabeur and Svitolina faced off in the 2010 Roland Garros junior final with the latter gaining the upper hand. 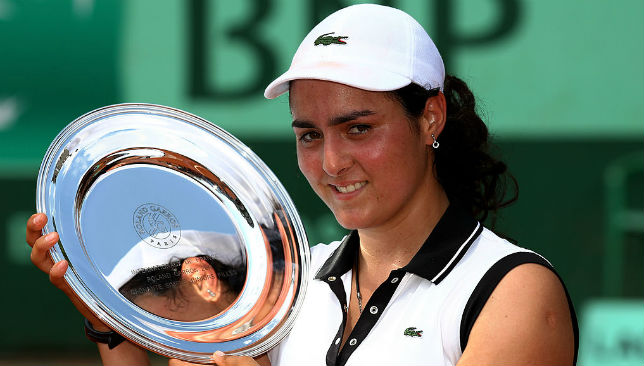 With the French Open title at Roland Garros in 2011.

Svitolina has come a long way since then and perhaps Jabeur is ready to catch up. Jabeur’s qualification in Dubai is significant in many ways.

While it is great for young Arab girls to come see stars of the WTA compete in the UAE, witnessing Jabeur is a whole other ball game. They’d be watching an Arab like them – someone who comes from a similar culture and shares the same values as them, pursue a career in tennis and show them that they too can follow suit.

Tunisian Selima Sfar, who is the only Arab woman in history to crack the top-100, served as an example for Jabeur, who in turn is doing the same for future generations.

But competing on Arab soil can amplify the impact Jabeur can have on youngsters from the region and the fact that she made into the main draw based on merit, not via a wildcard makes it even more impressive.

It was huge when Sfar made the quarters in Dubai back in 2001 and it could be just as impactful that Jabeur is in the draw on Sunday.

While Jabeur’s attacking slice-and-dice style is attractive and unique, it is her personality that can be her biggest asset when it comes to influencing Arab youth.

.@Ons_Jabeur is the 1st Arab woman to earn a place in @DDFTennis via qualification. Hear more from the Tunisian:

She is a popular figure in this part of the world, and one only needs to see her walking around the tennis club here to realise how great she is when interacting with fans.

Her humility comes across, which is a rare thing amongst many of the young talents emerging on both the men’s and women’s tours, and sooner or later, the WTA must realise how they can actually speak to a portion of the Arab population – estimated at 360 million – through someone like Jabeur.

While the North African still has a lot of work ahead of her in order to make the breakthrough she’s been dreaming about, the signs so far have been encouraging.

She got fitter thanks to a tough preseason, is getting more professional in her every move, has hired a coach she is comfortable with, and most importantly, is enjoying her tennis.

She says she is no longer focused on chasing points and money but is instead getting back to basics, loving the sport and the process behind it, just like during her junior days.

Here’s hoping that passion comes across to those watching her on Sunday on Court 1.

Five things to know ahead of DDFTC