Kickin' it with Kiki: How I've embraced the pressure in Paris and why I think the crowd was fair to Muguruza

PARIS, FRANCE — Roland Garros may sometimes be a tricky experience for French players but I must say I feel like I’ve always handled the pressure from my home crowd quite well.

I’m into my first French Open quarter-final and every single day is a new challenge for me.

I am a fighter and I’m confident, and I like to show that I can handle anything and that I’m not someone weak who would crumble under the pressure.

But it’s not easy every day because you want to do great for those people in the stands, for this support. It’s thousands of people, it’s lots of pressure, lots of expectations, so it’s not easy but it’s my mental strength that has got me through it.

You can see all my matches have been one big fight after the other; I’m not winning all those fights easily at all, but I just dig deep, I try to use this energy as a positive.

I’m just telling myself to embrace the pressure because at the end of the day, at the end of my career, that adrenaline, that pressure, is what I will miss the most.

It’s something you can’t find anywhere else in normal life except through sport and I take it as a huge privilege to see that so many people believe in me and put pressure on me. It means that I’m doing something great and that they believe that I can do even better.

So I think you’ve got to really be mentally strong to handle being the home player here at Roland Garros. We’ve seen big names, big champions in the past who couldn’t handle a situation like this – not only French players in France, but maybe Australians at the Australian Open or Americans at the US Open or Brits at Wimbledon. So it’s definitely not something easy, and maybe I’m not always going to respond well to this but the result at the end of the day doesn’t depend only on me, but also on my opponent.

Still, it’s true that since I first played the French Open, I never had regrets. I never felt that I went out there in front of 10,000 people and I just couldn’t play tennis, like I couldn’t feel my shots, my legs or I was totally paralysed. I’m extremely happy to have this privilege of feeling all this support, love and emotions.

I’ve had pretty tough draws over the years here at the French Open. I remember I had a wildcard in 2010 and I played Li Na – I beat her four years later, but the first time I lost like 7-5, 6-3, that was a great match. I also played against Dominika Cibulkova in 2012.

I had bad draws, I always played on big courts and I always embraced it. I didn’t end up winning those matches because tennis-wise my opponents were better than me but I always showed fight and I never felt like a fool out there. I always showed people that I want to belong there, I believed in myself, in the process, and I was always positive.

‘CROWD WAS FAIR TO GARBINE’

I know there’s been talk about the crowd being hostile during my fourth round against Garbine Muguruza but honestly I don’t think the crowd was bad at all with Garbine.

If you compare it to the atmosphere I experienced in the Stuttgart final in April against Germany’s Laura Siegemund – the people were extremely fired up, it was insane. I don’t know how many people can fit in the Porsche Arena – it’s also indoors – but it was ridiculous. I couldn’t hear myself breathing or talking.

It was so packed and loud but I never made any bad comments about the crowd because this is sport, it’s normal. People go there to enjoy themselves, to be entertained. If they have a home player, they pick their favourite and they support them. 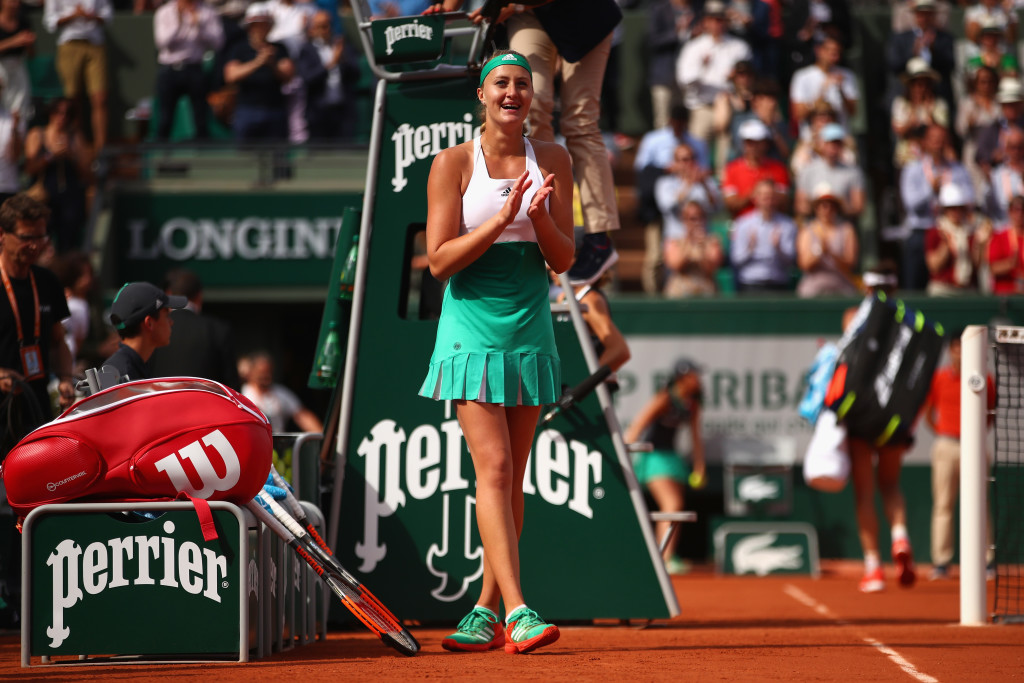 Of course there are rules, not to scream during points and so on. In Stuttgart it was like this, so that was very close to the limit, but I embraced it. I think it’s normal. I don’t know if I have a different mentality to other players or what – I heard what Garbine said. Me personally, I never made any bad comments about that atmosphere in Germany. In fact, I actually thanked the crowd for loving our sport that much and being so into it.

I wasn’t surprised in Stuttgart because my opponent was German and if we talk about my Roland Garros fourth round with Garbine, the crowd was absolutely fair I think. Only once it happened that many people screamed between Garbine’s first and second serve because they thought it was a double fault since they didn’t hear that the first serve was a let. But other than that, they were supporting, clapping for her great shots and points. They were never disrespectful nor did they cross the line, just a huge support.

I mean we’re in a Grand Slam, I’m a French player, it hasn’t happened for so long [for a female French player to do well here], it’s a big match-up everybody was waiting for, so I was expecting that.

It’s not just the crowd support that I enjoy here, I love this tournament and I have my own routines that make me feel very comfortable here.

They gave me my locker when I won the junior title here in 2009 so I have had the same locker every year – it’s kind of my lucky charm and I really believe it is because winning juniors, reaching the final in mixed, winning doubles and feeling great here… the locker is definitely my lucky charm.

There’s one lady in the locker room, Pat, she is like my mum, she’s so nice with me.

Having my meals on the sofa there watching matches on the screens while waiting for my matches… all these little routines – I just feel very comfortable.

My ex-doubles partner Caroline Garcia has also made it into the second week of the tournament and I’ve been asked about our falling out during press conferences and whether I plan on talking to her to clear the air after Roland Garros is over.

I don’t know if people realise that, yes we had an amazing successful doubles career together, but outside of tennis we never shared anything. We were totally different that we were kind of joining forces just for matches, not even practices – very rarely just for warm-ups – because we were both focused on our singles.

Outside of tennis, we never went to dinner together, we never went shopping together or stuff like that because our interests are way different. But it didn’t stop us from having amazing results in doubles because we were a great team.

So on one hand I didn’t lose much because it’s not like she’s been my best friend and I’d talk to her about everything in my life. 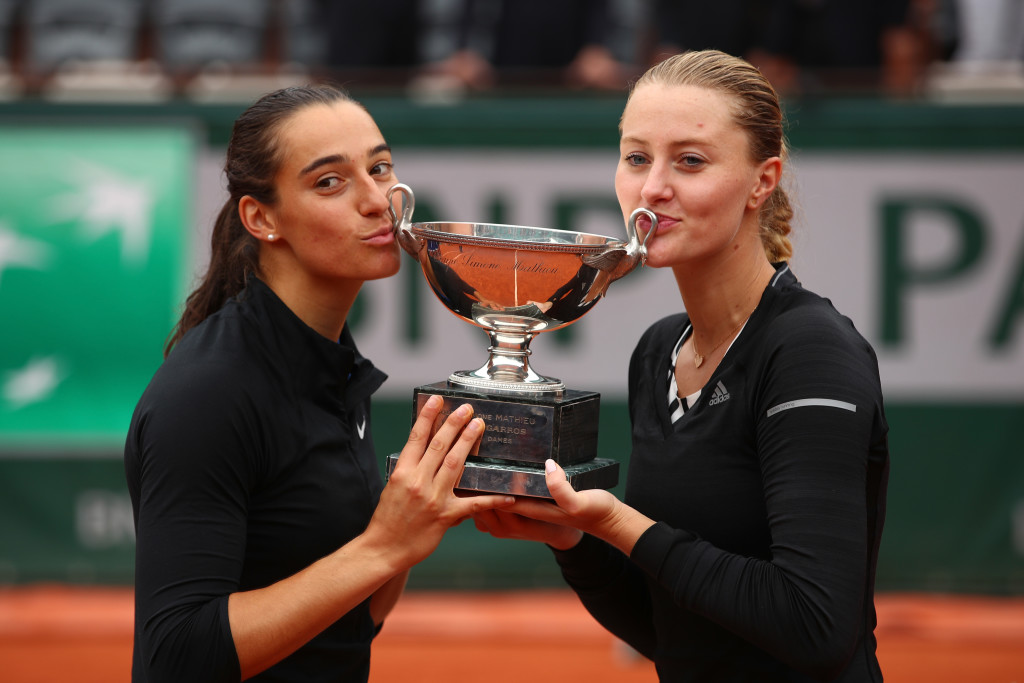 It’s very sad that it turned out like this, from her side, because what really happened is that she just decided that she wanted to stop playing doubles and she just sent me a poor message over the phone.

I would have understood any reason she would have given me to stop playing together –anything she would’ve told me I would’ve totally agreed and respected. But she didn’t have the courage or human values to come and talk to me face-to-face and say ‘listen Kiki, I have these goals, I see it like this, I want to stop for that reason’ but that didn’t happen.

So I was extremely disappointed about that. We met in Indian Wells in the ice bath and she was surprised I was actually cold with her. She wanted to know why I was cold and I was like ‘You’re asking me? I know we weren’t necessarily friends outside of the court but at least what we shared and lived through, our beautiful tennis results, you could have at least thought to see me face-to-face and tell me after all we’ve been through. You didn’t do that so I was very disappointed with you and I’m disappointed’.

And when I asked why she just messaged me and didn’t come to talk to me she didn’t have an answer. I felt a bit disrespected because I’m big on human values.

Now there’s no more drama. She’s doing her thing, I’m doing my thing, and that’s it. I didn’t see her, we’re not speaking that much and we are all just sticking to our routines and jobs.

Kickin' it with Kiki: Why it is important that I speak out about ...

Roland Garros day 7 diary and highlights: Why Del Potro is so pop...