Djokovic doesn't rule out taking a break to fix his problems, but is that what he needs?

Let’s just get one thing out of the way first: Novak Djokovic is one of the best losers in professional sport.

Few sports stars can walk off court following a comprehensive defeat then enter the press conference room shortly after and be as insightful as Djokovic is.

Wednesday was no exception.

He was willing to share his feelings of self-doubt, talk about his troubling dip in form and admit that he has no specific plan as of yet to bounce back.

This time last year, Djokovic had just won four Grand Slam titles in a row, becoming the first man to achieve that feat since the legendary Rod Laver in 1969.

Over the past 12 months, Djokovic has been unable to defend any of those four Majors and with more questions than answers to his current predicament.

While he has managed to perform well in the last few weeks, he remains far from his best and his inconsistency from one match to another is probably what is the most alarming.

Djokovic will have 5805 points on Monday, which is unofficially his lowest points total since June 2007. Exactly a decade.

The warrior-like Djokovic was nowhere to be seen against Thiem in Paris, even though the Serb entered that match up with a 5-0 record against the No6 seed, including a 6-1, 6-0 drubbing in Rome last month.

“It’s hard to comment (on) the third set. Obviously nothing was going my way and everything his way. Just a pretty bad set,” was all Djokovic could say about that ‘bagel’ Thiem served him.

“He deserved to win. He was definitely the better player on the court today.”

Those very two same players faced off in the semi-finals at Roland Garros last year but it was Djokovic who came through in straight sets easily.

A lot has changed for both competitors ever since and Djokovic knows it.

“More or less all the parts of my game are kind of going up and down. I’m feeling like I’m missing consistency. I play a great match or two in a row, and then I play a completely opposite match. That’s what happened today,” explained the 12-time Grand Slam champion.

“It comes and goes. As an athlete you have to accept that and get used to it. I’m aware of where I am at the moment. I know where I also can be. So I’m working towards that.”

He just started working with Andre Agassi two weeks ago, but still, is a break from the sport worth considering? He doesn’t know but he has not ruled it out.

“Trust me, I’m thinking about many things, especially in the last couple months,” Djokovic admits.

“I’m just trying to sense what’s the best thing for me now. Obviously there has been a lot of changes with the team and so forth. I’m so excited to work with Andre and the new team. At the same time, I have responsibility to the game itself, towards others. We’ll see.

“Obviously it’s not an easy decision to make, but I will see how I feel, anyway, after Roland Garros and then decide what to do next.”

Djokovic is unspecific when he tries to discuss what the biggest thing is missing from his game right now. He says it’s “technical stuff” and general inconsistency.

But his mentality must be a factor as well. Would a break from the game help? Skipping the grass season doesn’t sound like a terrible idea, especially that he’s only defending third round points at the All England Club and he only typically plays one event on the surface, with no Wimbledon tune-ups.

He could fly to Nevada where Agassi lives and just spend quality time training with him there then take on the North American hard court swing.

It’s true that the four-week break Djokovic took in February did not help him much but perhaps a break while being coached by Agassi would be different.

Agassi left Paris before Djokovic’s fourth round match and wasn’t in the stands on Sunday nor Wednesday. A reporter asked the Serb if his coach’s absence made a different against Thiem but Djokovic immediately rejected that theory.

“Don’t put Andre in the midst of this. This final set, of course, that’s all me,” he assures.

It is ridiculous to suggest that Agassi can make that big of a difference after only working with Djokovic for a total of seven days on court. It remains a good idea to work with the American eight-time Major champion but it will be key to spend enough time together to get Djokovic back on track. Hiring a full-time coach as well for the day-to-day grind of the tour must be high on his priority list.

A year ago, Djokovic had won four straight Slams and made 23 of 24 Slam SFs.

All four titles go undefended, only once reaching SFs. #rg17

For now, Djokovic is clinging onto a positive perspective and dismisses the notion that he may have lost all motivation after completing the Career Grand Slam last year in Paris.

“It’s an opportunity for me, in a way, some kind of lesson to be learned and to kind of progress in whatever way life wants me to,” he said philosophically.

“So I’m just figuring it all out and trying to be in the moment. Obviously I love this sport. I’m motivated as any other player on the tour. Even though I have played for many years, I still want to do well.”

Djokovic will drop out of the top-two in the world rankings for the first time since 2011 and Doha is the only title he has won in the last 10 months.

“For me, it’s a whole new situation that I’m facing, you know, especially in the last seven, eight months, not winning any tournament, which hasn’t happened in many years,” he adds.

The 30-year-old insists getting back to his best form is something he is motivated to achieve. 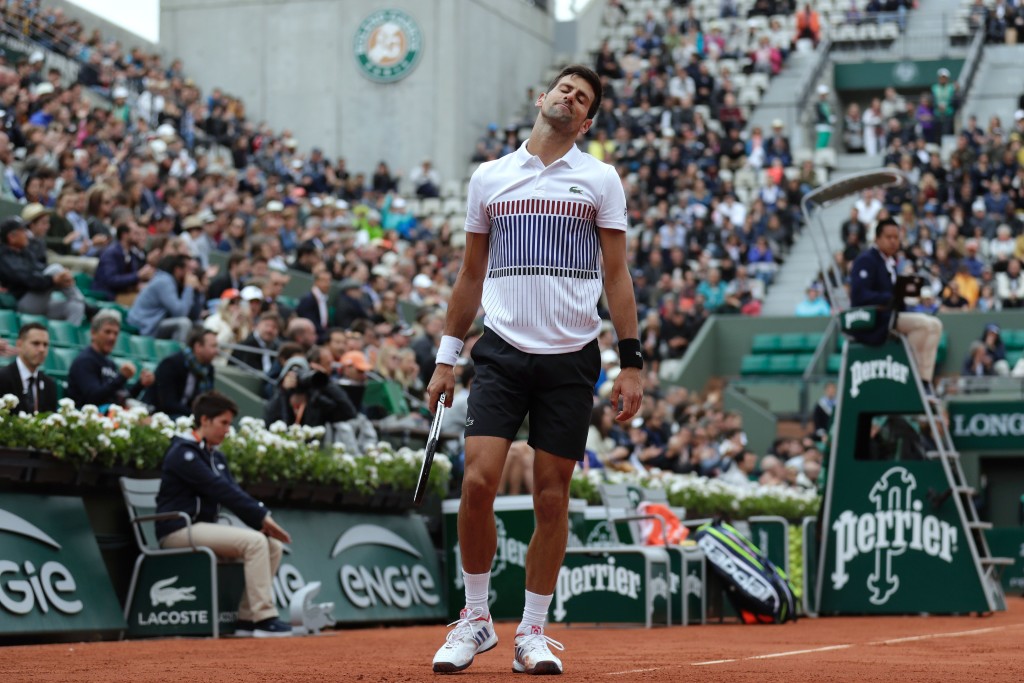 What a difference a year makes!

21 of Djokovic’s errors came off the backhand – a shot that is usually one of his biggest strengths.

“It was not there for me today, especially in the second part of the match. You know, I was just unable to hit the ball well and many unforced errors. And he was just getting better and better and more confident as the match progressed. That was the case,” he admits.

“If first set went my way, who knows? Maybe the game would change. But that’s sport. That’s how it goes.”

The worrying part for Djokovic is that there is potentially more than one problem to attend to – his tennis, his mentality, his team…

The good news however is that he’s willing to figure it out and not throwing in the towel.

“At the US Open, I just was emotionally very flat and found myself in a situation that I hadn’t faced before in the professional tennis career. It’s obviously tough to get out of it and figure out the way how to move ahead. At least I’m trying,” he concludes.

Nadal on Thiem: He's very powerful, he doesn't give you a lot of ...

RG Day 10 diary and highlights: Bacsinszky and Ostapenko to face ...

Roland Garros day 7 diary and highlights: Why Del Potro is so pop...