RG final diary: Nadal's 10th is special, not because of the number, but the journey to get to it

It’s difficult to quantify what a 10th French Open title for Rafael Nadal actually means. Eight was impressive, nine was mind-blowing, 10 is… one more than that?

It is by all means an incomprehensible feat – one that has literally left his coach Carlos Moya speechless.

“There are no words to describe this,” Moya said after the final when he was asked to put Nadal’s historic achievement into context.

But if we really want to put a value on this 15th Grand Slam trophy won by Nadal, we should take a look at what it took for him to get there rather than focus on how cool it is to have a nice round figure like 10, of any title.

It had been three years since Nadal had won a major. During that time, he suffered from knee, back and wrist problems, lost his confidence, dropped to as low as No10 in the rankings – that’s bad in his world – had his worst results in over a decade and was written off by many out there.

Last year he walked away from Paris with his wrist wrapped in a blue bandage, his eyes red from emotion after he was forced to pull out ahead of his third round due to injury, at a time when he believed he was finally recovering his best form.

“It was a missed opportunity,” Nadal admitted on Sunday during his press conference, which was a stark contrast to that tearful one he had a year ago to announce his withdrawal from the tournament.

One often wonders how he finds it in himself to go through one comeback after another.

He has had so many injury setbacks but he never stopped trying to bounce back.

His journey over the last 12 months has taken him from vacationing with his girlfriend on a boat trying to forget his woes, to being No1 in the Race to London, No2 in the world, with a 10th Roland Garros trophy in tow.

That is why this No10 is special, that is why his uncle Toni came down to the court to hand him the trophy – it is their last year touring together – and that is why he had broken into tears after his victory.

Nadal was asked if the last three years felt too long having not been able to add another major to his tally.

“We cannot reduce our sport to four tournaments per year. That’s the real thing. For me, winning Monte Carlo means a lot, then Barcelona, then Madrid in front of my crowd. So I enjoyed all these things and all these titles are so important for me,” the Spaniard said.

“Yeah, today is more special, true. Win the 10th Roland Garros is something unique and different is true. And I am very happy and emotional, but I cannot think all the time about Slams. For me, every week is a different story and every week is beautiful event, and I enjoy playing tennis every week.”

It is that mentality that keeps him coming back. Nadal loves the process as much as he loves the result.

He was asked if he will feel freer for the rest of the season now that he’s finally won a 15th major. He quickly reminded us that he has “doubts every day”, and that he will feel under pressure in a week’s time when he is preparing for the grass tournament in Queen’s.

That kind of hunger and level of competitiveness cannot be taught.

For Nadal, tennis is simple. You train, you enjoy it, you fight, you win, you repeat.

We should expect to see more of that for the rest of the season. 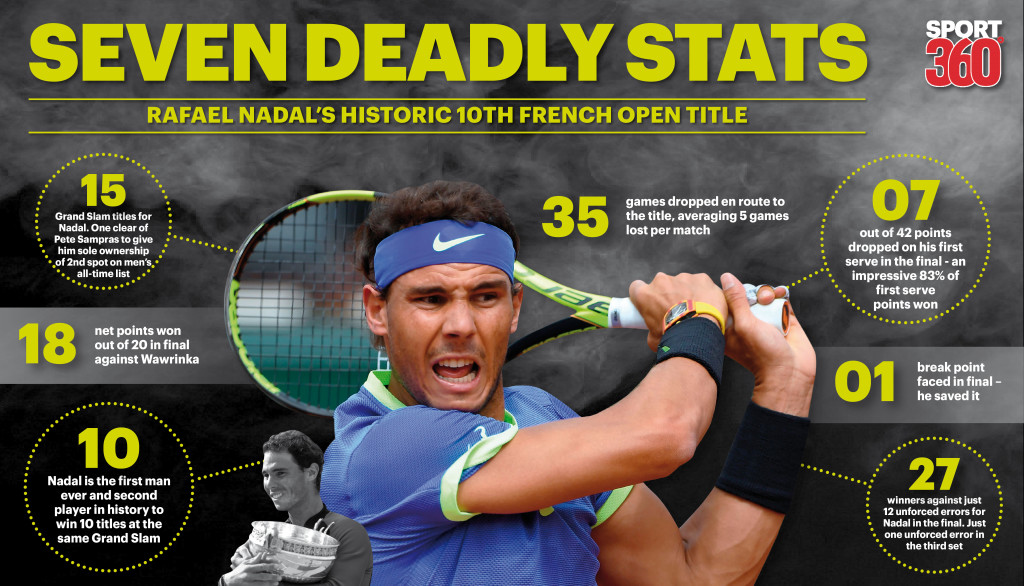 I feel ya, Stan! pic.twitter.com/Q26PfnlZpJ

Tweets of the day

This has to be 1 of the greatest achievements in sport @RafaelNadal winning his 10th @rolandgarros title! The King of Clay is back!

It seems all you need is to have your birthday during the French Open and you have a great chance of winning:), congrats Rafa and Jelena!

Now if Federer could win Wimbledon and then Nadal win US Open I would actually cry of happiness ?❤️ #legends #Nadal #federer

Pau Gasol compares Rafael Nadal's achievements to greatest ever i...

Legends and players weigh in on Nadal's potential 'Decima'

Ostapenko: I like extreme things and probably that’s why I play...

Halep's coach Cahill: Simona can walk tall and hold her head up h...