Down the line: Federer's wise decision, Nadal's confidence, and a hot WTA race

What do you do when you exceed everyone’s expectations, including your own, and win the three biggest titles on offer in the first quarter of the season? You give yourself an eight-week break, of course!

At least that’s what Roger Federer has chosen to do after claiming the Australian Open, Indian Wells and Miami trophies in his first three months back from a six-month injury layoff.

The Swiss had hinted at a light clay schedule since last January, and said in Dubai he wasn’t sure how much work he’s willing to put into the French Open. The final verdict came on Sunday after his Miami triumph, as Federer announced his next appearance would be at Roland Garros, with no clay tournaments scheduled in the build-up.

At this point in his career, can you blame him? What Federer has managed to achieve, as a 35-year-old, on the back of a six-month hiatus, feels like a once-in-a-millennium kind of experience.

Tennis’ most loved artist has mastered a new form of art: Striking the balance between improving his tennis, recovering his body, maintaining his health – all while winning almost everything (he’s lost just one in 20 matches in 2017).

If he wants to keep that up, then a more selective schedule is a no-brainer.

After he won his 18th major at the Australian Open, Federer proved to himself he can actually still reign supreme at the biggest events on tour and it’s only natural he now focuses on the major tournaments he believes he can win, rather than risk injury and waste energy on a surface like clay that is undoubtedly his least favourite.

Will another interruption disrupt his rhythm? One can’t deny the value of momentum. But considering Federer did not play in the second half of 2016, then went on to win a grand slam in his first official tournament back – a lengthy break does not seem problematic.

With hard courts on the backburner for now and the clay season upon us, here are things we have learned, and others to look forward to…

The last two times Federer had started a season with a 19-1 win-loss record was in 2005 and 2006. Both seasons he won the ‘Sunshine double’ (Indian Wells and Miami), both seasons he won two or more slams and both seasons he ended the year as the world No1. Will the Swiss finish 2017 at the top of the rankings? He’s up to No4 right now and it’s only the beginning of April, and he has no points to defend from July onwards. It’s highly possible! 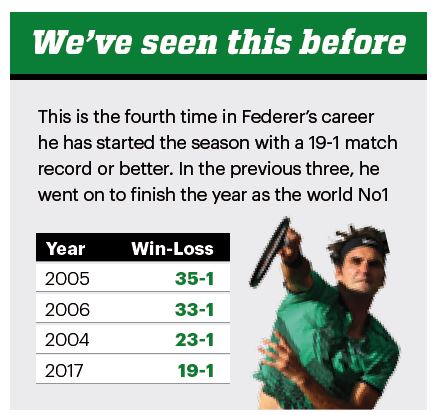 IS A 10TH ROLAND GARROS IN THE CARDS FOR RAFA?

Rafael Nadal has a lot to be content with. He joins Federer at the top of the match win leaderboard in 2017, with 19 victories and five losses, he has reached three finals in five tournaments played and is up to No5 in the world. A more critical view however would note that he has lost all three finals he contested this season, is 3-3 against top-10 opposition, and seems to have lost his edge over Federer. Two of their three matches this year were close but you got the sense Federer was the better player throughout, even when he was down a break in the fifth in the Melbourne final.

The good news for Nadal is that he feels better with every solid match he plays and he’ll enter his favourite stretch of the season with lots of confidence.

WILL WE BE SEEING SOCK IN LONDON?

American Jack Sock has moved into the top-eight in the ATP Race to London, propped nicely at No7 after making the semis in Indian Wells and quarters in Miami. He is a two-time titlist this year and is right behind Federer and Nadal on the match wins leaderboard with 18 victories against four losses. He’s also done well on clay in the past (Jacque Sock has made the third round or better at Roland Garros in the last three years). Could he be the first American since Mardy Fish in 2011 to qualify in singles for the season finale in London? That would be massive.

HOW BIG IS THE LJUBICIC FACTOR?

A lot is being made of Ivan Ljubicic’s role in Federer’s incredible run, especially in his three wins over Nadal. What had been a lop-sided rivalry mainly dominated by the Spaniard has suddenly swung in Federer’s favour and many feel the Croatian ex-world No3 has a lot to do with it.

Federer had spoken earlier this year about how he felt he and Ljubicic hadn’t been able to spend that much time together simply due to his injury but that he has been a big help as part of his team. In Miami, he expanded on that but didn’t single him out as the main X-factor in his resurgence. Ljubicic was 2-7 against Nadal head-to-head, with one of those two wins coming against the Mallorcan way back in 2005 when Nadal was 18 years old.

Ljubicic has undoubtedly been a major help but you get the sense that it is a combination of numerous factors that have resulted in this Federer transformation (bigger racquet, time off, renewed hunger, improved backhand, off-colour rivals) – not just his coach.

WOMEN’S RACE IS ON FIRE

Karolina Pliskova’s back-to-back semi-finals in Indian Wells and Miami have seen the Czech big-hitter rocket up to the top of the Road to Singapore standings. The 25-year-old has a 23-4 win-loss record this season, has won Brisbane and Dubai, and is in great shape. It’s worth noting that only three of those 23 wins came against top-10 players.

Meanwhile, Johanna Konta moved up to No2 in the race thanks to her Miami Open title run (also a career-high No7 in the rankings), with Caroline Wozniacki in third, ahead of Serena Williams, who is fourth. Wozniacki has lost all three finals she played this year but looks on her way back into the top-10 in the world rankings (she’s now at No12). The incredible Venus Williams is No5 in the race and No10 in the world rankings, thanks to her run to the quarters in Indian Wells and semis in Miami.

.@Venuseswilliams jokes about Serena ambushing her in her SnapChat vids. "We're going to have to go to therapy after those videos." pic.twitter.com/MVQjjo8Cfm

WHEN WILL WE NEXT SEE SERENA?

The American 23-time grand slam champion hasn’t played since she won the Australian Open in January. She pulled out of Indian Wells and Miami citing a knee injury and has been seen on social media this week on a family vacation, meaning she’s not back on the practice courts yet. Will she pull a Federer and skip the clay? She is entered in the Madrid Open tournament, which starts on May 7, so she still has a month to put on her sliding shoes on for the dirt.

You know who is a back-to-back winner in Miami? Belgian coach Wim Fissette, who won it last year while coaching Victoria Azarenka, and this season with Johanna Konta. His brilliant track record also includes a successful partnership with Simona Halep in the season in which she made the French Open final.

THE CURIOUS CASE OF KERBER

Angelique Kerber is the world No1 with an asterisk next to her name. She is title-less in 2017, is 12-7 on the season and is 0-7 against top-35 opposition this year. Instead of switching her focus to clay, she is instead playing on hard court in Monterrey, Mexico this week, which feels like a bizarre choice. Here’s hoping she recaptures her stunning 2016 form soon.

Kimiko Date returning to professional tennis at the age of 46

Nick Kyrgios giving his haters less reasons to hate him

WATCH: Sharapova inspires women at conference ahead of tennis ret...