Weekend to forget: Nastase and Keothavong.

This past week in tennis has been so eventful, it made 2016 look like a dull season in comparison.

2016 – a year where Maria Sharapova got suspended for committing a doping offence, Roger Federer missed six months injured, Angelique Kerber won two majors and became the world No1, and Victoria Azarenka announced she was pregnant and had her first child in December… that sounds hard to top in the eventful department, no?

Well think again! 2017 has upped the ante, but sadly it hasn’t all been bright and shiny.

I refuse to give the Romanian Hall-of-Famer more time than he deserves but here’s the concise version of my reaction:

There should be a zero tolerance policy in tennis for racism and whether the person making the remark “intended” to be racist or thought he was making a “joke” should not matter. Nastase’s comments regarding Serena Williams’ unborn child were abhorrent and all he needs to do to realise how unacceptable they were is to look at the backlash and acknowledge he was wrong.

His sexist behaviour towards Anne Keothavong, GB’s Fed Cup team captain is also unacceptable and sending flowers is by no means an apology.

My second run-in with Ilie Nastase. He then called me ugly off camera, just for good measure pic.twitter.com/pt2begOpTx

His on-court tirade, name-calling, and abusive comments to Keothavong, Johanna Konta and Press Association reporter Eleanor Crooks, followed by the complete lack of remorse makes it all a no-brainer for the ITF to give him a lifetime ban. He is currently provisionally suspended by the ITF. Considering his latest statements to the Daily Mirror in which he said “I don’t regret it and they can send me to prison if they want – I don’t care”, he really has no place in the sport anymore, irrespective of his accomplishments as a player.

The fact that someone excelled at tennis and shaped part of the history of the sport does not give them permission to cast a dark cloud on it anytime they please and is not an excuse to act like a complete fool. We need to separate between history and reality and I hope Nastase is permanently banned from being in tennis in any official capacity.

While Simona Halep, who has not openly denounced Nastase’s actions but did say “of course I’m not defending anyone”, her compatriot Nadia Comaneci took to social media to speak up about the incident.

"Ilie has been my friend for many years, but I can not condone or defend his recent ugly and very offensive remarks."

Finally some sanity in this world!

ALL EYES ON STUTTGART

Meanwhile, Sharapova’s return to action this Wednesday in Stuttgart following her 15-month doping suspension has obviously hogged its fair share of headlines. Again, not all of it has been pretty.

The Russian’s ban ends at midnight Tuesday, which means she is only allowed on site on the third day of the tournament.

While tournament organisers have not broken any rules, the fact they seemed to be bending over backwards to accommodate a doping offender and are giving her a wildcard that could have perhaps gone to someone more worthy has irked many players, who are getting more and more vocal about it by the minute. The latest being Sharapova’s first round opponent, Roberta Vinci, who said yesterday she doesn’t believe the five-time grand slam champion should be invited to any tournaments.

The wildcard controversy remains a tricky call. In an ideal world, you want the most deserving players to receive invitations to tournaments, but “deserving” can be subjective. Many can argue that Sharapova has given a lot to the sport, has served her time, and deserves wildcards until she gets her ranking up.

Others, and there have been many, prefer it if she works her way back up, with no free invitations passed out to her. That is also understandable. Why would Sharapova deserve a wildcard for Stuttgart more than someone like Julia Goerges, who missed qualifying because she was helping Germany win a Fed Cup tie last weekend?

In the end, money talks. Porsche are the title sponsors of the Stuttgart event and they are sponsors of Sharapova. It makes sense for them to make that call, whether we feel it’s fair or not. It’s now up to the French Open to figure out whether the 30-year-old deserves a wildcard for their event next month.

If Sharapova makes the final in Stuttgart, she can probably make the cut-off for French Open qualifying. If that happens, the logical thing would be for her to play qualies, assuming the tournament can handle the security issues that come along with this situation.

In conclusion: If this whole Sharapova-wildcard mess had a status on Facebook, it would be ‘It’s complicated‘.

Rafael Nadal
The Spaniard became the first man in the Open Era to win 10 titles at the same tournament by ruling once again in Monte Carlo.

Considering Roger Federer is not playing any clay events except Paris, Andy Murray’s form is questionable following his elbow injury, Stan Wawrinka is being his typical fluctuating self, and Novak Djokovic is still losing matches he’s expected to win, you’d have to put Nadal as a favourite for Roland Garros at this point. 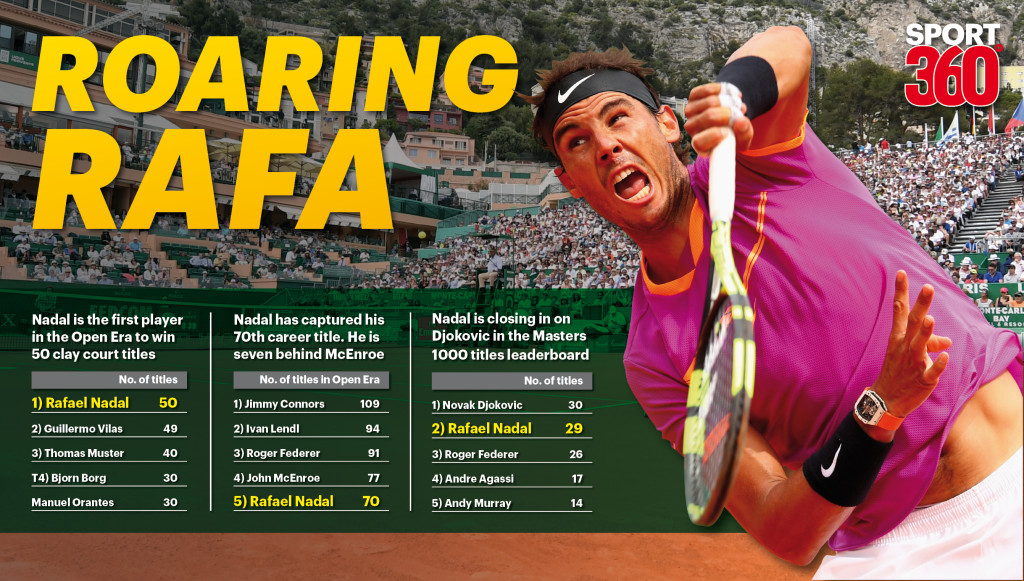 Another one to look out for would be David Goffin. He’s shown flashes of brilliance from the very start of the season – even in Abu Dhabi at the Mubadala World Tennis Championship end of December – and has a real chance to shine in Paris next month.

World No125 and 18-year-old Aryna Sabalenka gave Belarus an unassailable 3-1 lead over Switzerland to send Belarus into their first-ever Fed Cup final. Belarus’ achievement is all the more remarkable considering their highest-ranked player in the squad is the 23-year-old Aliaksandra Sasnovich, who is ranked No96 in the world. They took down a Swiss team that includes world No22 Timea Bacsinszky, No54 Viktorija Golubic and doubles star Martina Hingis. They will now square off with the United States in the final in November, with Victoria Azarenka potentially joining them following her maternity leave.

The French umpire lost the plot in a controversial call that seemed to have swung the Monte Carlo semi-final between Nadal and Goffin into the Spaniard’s favour. He pointed to a completely different mark on the centre court clay and cost the Belgian a game point for 4-2 in the opening set. Goffin’s subsequent meltdown may not be Mourier’s fault, but still, you’d expect a man of his experience to at least point to the right mark.

Serena pens letter to her unborn child, Ennis-Hill backs her to h...

WATCH: Federer on playing the French Open and gunning for No1

Williams vows to return in 2018 after pregnancy

Konta responds to Cirstea's comments after Great Britain lose to ...