“I’m ‘NextGen’ but the rankings say it for themselves,” said Alexander Zverev after claiming his fourth title of the season on Sunday in Washington, to rise to No. 4 in the ATP Race to London and solidify his position at No. 8 in the world rankings.

The 20-year-old is at the helm of the ATP’s ‘NextGen’ campaign, which involves players aged 21 and under, who are ranked in the top 200.

The top seven (plus a wildcard) in the so-called Race to Milan standings, will compete in the newly-introduced ATP NextGen Finals tournament in November. It’s an attempt to boost the popularity of the upcoming generation of tennis stars, that would carry the baton from the sport’s current household names.

It’s a good idea in theory, except there’s a glitch.

Zverev is so far ahead of his NextGen peers that he has more than three times the number of points than the No. 2 player in the Race to Milan (Karen Khachanov), and has more points than all four players ranked No. 2 through No. 5 (Khachanov, Andrey Rublev, Daniil Medvedev and Borna Coric) combined.

The young German is, simply put, in another league, and is actually a strong contender for the ATP World Tour Finals, that features the top eight in the year-to-date rankings.

Only two players have won more titles than Zverev this season – Rafael Nadal and Roger Federer – and he’s the only one outside those two to have claimed a Masters 1000 trophy in 2017.

If the NextGen concept is about the future generation of stars, and Zverev is currently the fourth-best player on tour in 2017, it’s understandable that he feels he doesn’t fit the bill.

“I think I showed I’m not an ‘in the future’ kind of guy. I’m right now,” said Zverev on Sunday.

Tennis writer Tumaini Carayol noted the gulf in number of points between Zverev and his NextGen peers and said the “hash-tag no longer fits”. Nick Kyrgios, the world No. 24, shared Carayol’s views and added: “It never did.”

The NextGen idea is a good one, but it’s becoming apparent that the criteria used to group these young players together needs to be looked at.

Right now, it’s looking like it’s Zverev, and a chasing pack, whose members undoubtedly feel there’s a misbalance in the Race.

Thanasi Kokkinakis, who would be a Milan contender had he not missed a major chunk of the season through injury, has his reservations regarding the concept.

“I think it’s good but I just think not everyone’s on the same path,” said the young Aussie.

“It’s tough to kind of promote everyone the same. Tennis is such an individual sport you’ve got to have your own way, doing everything by yourself a little bit.

“And then where do you draw the line? What’s NextGen, what age is NextGen and what’s current Gen? I don’t know, it’s a bit weird, but I guess that’s for the ATP to decide.”

Considering this is all still new for the ATP, it’s only natural that the system requires some tweaking, but it won’t be as easy as simply discarding someone from the equation based on his high ranking. What if that high-ranked player doesn’t end up making the ATP Finals in London and would want to remain being considered for the NextGen Finals in Milan?

Still, if you’re consistently beating top-10 players (Zverev has five top-10 wins this year) and are winning multiple titles, including Masters 1000 and ATP 500s, within the same season, you are no longer a next-generation player. You’re part of the current game’s elite. 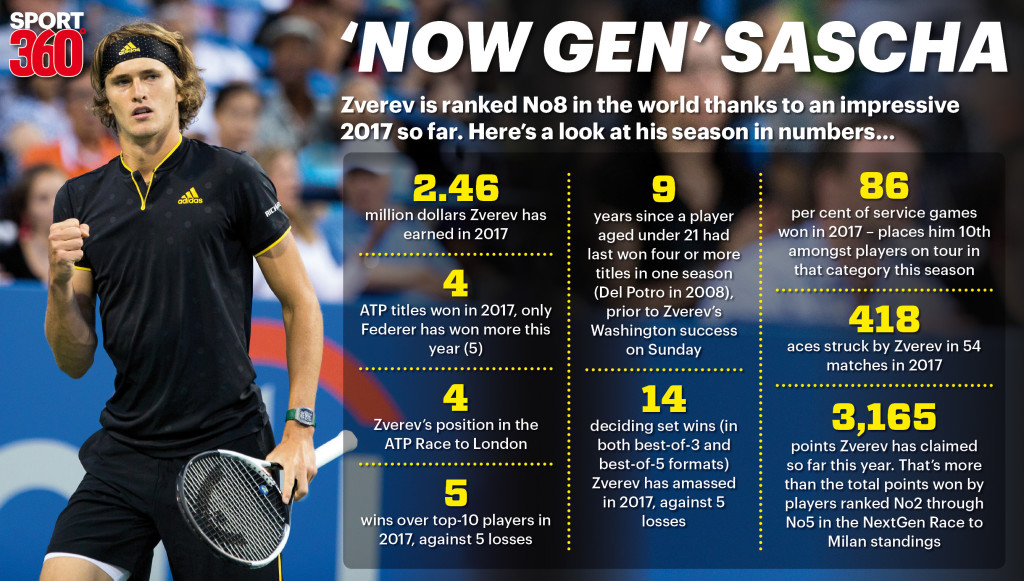 It’s clear Zverev is not too interested in being dubbed a NextGen contender, so maybe the ATP can leave it up to the players to decide? That could also get messy.

The WTA experimented with an exhibition event for their young crop that preceded the Finals in Singapore in 2014 and 2015. The WTA Rising Stars tournament featured four players from the tour’s younger generation but they were chosen based on a fan vote, so it was more of a popularity contest.

The women’s tour scrapped the idea though last year as it didn’t gain much traction.

The NextGen Finals will, of course, be based on ranking (except for that one wildcard) and the ATP is using the tournament to test various new rules and scoring formats.

We’ll have to wait and see how the first edition is received but if Zverev qualifies for both London and Milan, it only makes sense that he skips the latter, because you’d want the NextGen Finals to be as competitive as possible.Him going there would change that.

Also, why would he go to an event that offers no ranking points a week before what could be his maiden ATP World Tour Finals?

I’m all for promoting the younger tennis players but it’s obvious Zverev’s case requires a closer examination of this project from the ATP.

Wimbledon: Bernard Tomic and Daniil Medvedev heavily fined for 'u...

Interview: Kokkinakis opens up about 'lifetime of injuries' and h...