Roger Federer, foiled once again one match from a first-ever US Open match against Rafael Nadal, said he just didn’t deserve to beat Juan Martin del Potro in the rematch of their epic 2009 final.

“I feel I have no place in the semis and he will have a better chance to beat Rafa, to be honest,” Federer said.

“The way I played or am playing right now, it’s not good enough in my opinion to win this tournament. It’s better I’m out and somebody else gets a chance to do better than me.”

And the ruined possible first-ever New York matchup between Federer and Nadal, which had been a focus of attention headed into the match, was an afterthought to Federer in the wake of a comprehensive loss.

“I didn’t even think about it, as I lost that match, that it’s not going to happen,” Federer said. “I’m dealing with just trying to understand what happened and just to overcome this in the next few hours, days, weeks, whatever it is. I’ll be fine.

Another INCREDIBLE victory for @delpotrojuan as he defeats Federer 7-5, 3-6, 7-6, 6-4 to reach the #USOpen Semifinals! pic.twitter.com/PSVGcQWICn

“Of course it is a pity, but Juan Martin deserves it more.”

Federer said in some ways he wasn’t disappointed because he knew his game was weaker than it looked, having been aided by playing three rivals in a row who are a combined 0-40 against him.

“If I ran into a good guy, I was going to lose, I felt,” Federer said. “I don’t want to say I was in negative mindset, but I knew going in that I’m not in a safe place.

“Might have depended too much on my opponent, and I don’t like that feeling. I had it throughout the tournament, and I just felt that way every single match I went into.”

Federer made 41 unforced errors, nine more than his rival, and some of them were woefully off target and well off the court.

“I tried until the very end, “Federer said. “And smashing certain stuff in the net that I normally wouldn’t, smashing forehand volleys into the back fence, I mean, that stuff sucked. You know, honestly, it was terrible.”

HE CAME UP WITH THE GOODS 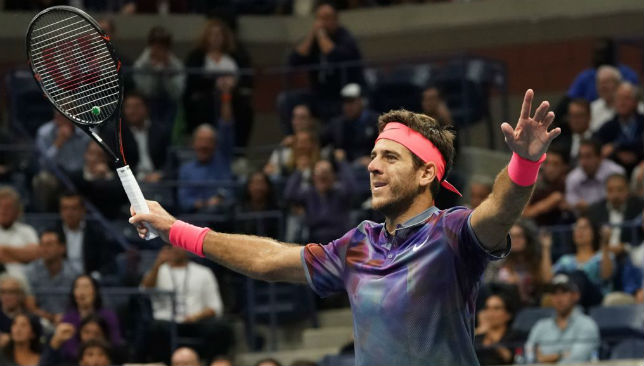 “He came up with the goods when he needed to and I helped him a little bit sometimes too maybe,” Federer said. “But he was better today, especially on the big points.”

As for his four squandered set points in the tie-breaker, Federer said, “I don’t think those four points made all the difference. I missed too many balls.”

The 36-year-old Swiss said that he isn’t too crushed after two Slam titles about the disappointing defeat.

“It should hurt, and it does, rightfully so, but I think my perspective at this age and with the season I’ve had is easier to grasp faster, so I’ll be fine quickly,” Federer said.

“Sure, I would have liked to do more here, especially with the year that I had. It has been tough, you know, so it’s all right.”

A back injury from a Montreal finals loss to 20-year-old German Alexander Zverev strill hindered Federer at the Open.

“I just think it slowed down my rhythm and whatever it was throughout the tournament, because I was never really able to turn it on completely,” Federer said. “I played OK, but I never felt like I got to the great level I can play at, but that’s OK.

“I’m out of this tournament because I wasn’t good enough in my mind, my body and my game.”