There has been no shortage of incredible comeback tales this season and it seems fitting that both US Open women’s finalists – Sloane Stephens and Madison Keys – each has their own surgery-to-triumph journey in 2017.

Stephens missed 11 months of action, from last year’s Olympics to this year’s Wimbledon, in which she had an operation done on her left foot.

The 24-year-old American slipped to 957 in the world and up until last month had not won a singles match since Wimbledon 2016.

Yet within six weeks, Stephens has racked up 19 wins against four losses and is guaranteed a return to at least No. 22 in the rankings when the new list is released on Monday. 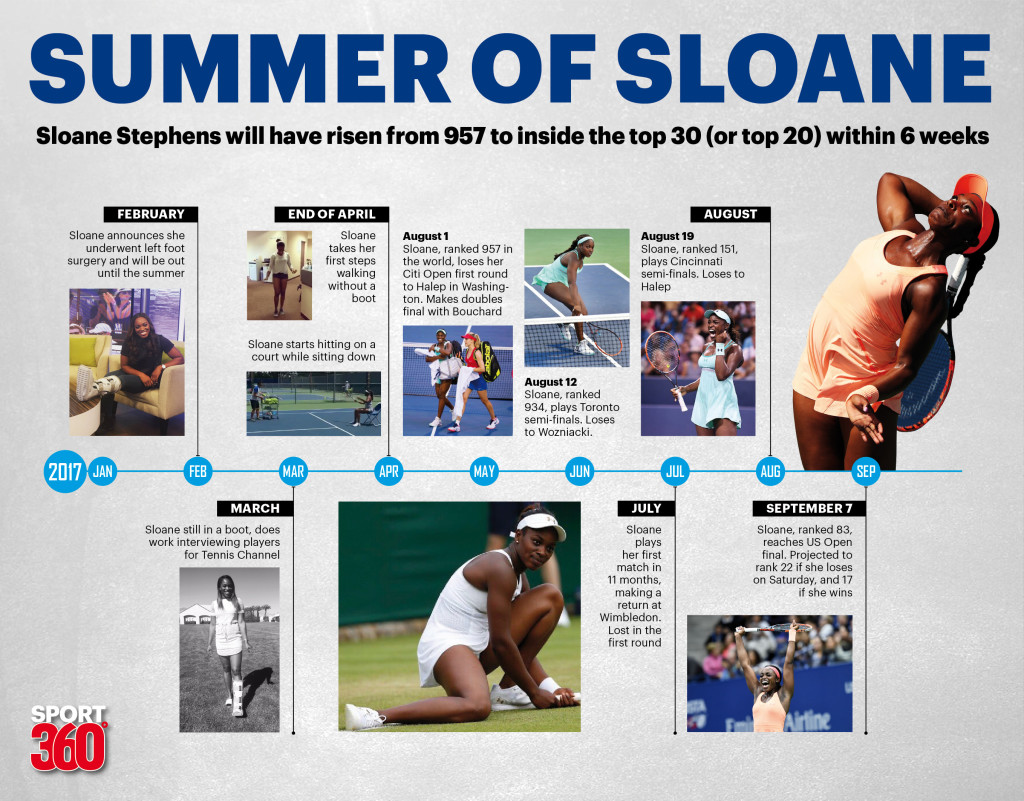 Stephens made the semis in Toronto and Cincinnati, and is in the US Open final, and she has done it all by taking down some massive scalps.

Her route to the title match in Flushing Meadows this fortnight saw her defeat:

Her other victims this summer include Petra Kvitova (lost to Stephens in Toronto and Cincinnati), Lucie Safarova, Angelique Kerber and Ekaterina Makarova.

Stephens has spent a total of 11 hours and 35 minutes on court in singles at this US Open and the average ranking of her opponents is 26.5.

POSITIVITY HAS BEEN THE KEY

Stephens has gotten herself out of tricky situations these past few weeks and she explains how staying positive has been crucial for her. She dropped the second set against Venus in the semi-finals on Thursday but hung on and had the final say in the end.

“Yeah, I guess because I’m just getting old (smiling), more calm and just kind of — it’s very situational. Tennis is very situational,” says Stephens. “I think once you realise that it’s not life or death out there, like, things — like, you can turn a tennis match around.

“When I am on the court, I realise if I just stay positive with myself, I can make a lot of things happen, and I can fight back from a lot of things.”

DESPITE SURGERY, SHE KEPT HER MOVES

It’s no secret that speed and impeccable footwork are two of Stephens’ greatest strengths and it’s remarkable how she has managed to return from foot surgery and still maintain such great movement.

“I was on a walking boot like a month before I played Wimbledon,” she admits.

“I knew I was going to have to play my way into shape, and I think I’ve done that pretty well. I got a lot of matches in. I’ve run a lot. I’ve played a couple of three-setters. So, yeah, I think my movement is probably what’s kind of kept me in some of these matches, shockingly.”

As a 19-year-old, Stephens had her early breakthrough at the 2013 Australian Open, where she beat Serena Williams en route to the semi-finals. She made the fourth round or better at all four majors that season. It has taken her four years to get back to the semis at a Slam.

PROUD TO BE PART OF HISTORY

Sixty years ago, Althea Gibson became the first African-American player to win a Grand Slam by claiming both Wimbledon and the US Open in 1957. Stephens was one of three African-American women featuring in this fortnight’s semi-finals (along with Keys and Venus).

“I don’t think there is any other word to describe it than “amazing” for me and Maddie. Obviously, Venus, we are following in her footsteps. She’s been here. She’s represented the game so well as an African-American woman. Maddie and I are here to join her and represent just as well as Venus has in the past and honoured to be here,” said Stephens in New York on Thursday.

Sloane Stephens ousts Venus Williams to set up US Open final with...

Down the Line: Stephens ready to fly after clinching WTA crown

Wimbledon: Madison Keys is an 'emotional wreck' when watching Pet...