An all-American final in the Big Apple.

Here, AFP Sport looks at five key facts surrounding what promises to be an epic clash at Arthur Ashe Stadium.

Who do you think will triumph?

First-time Grand Slam finalists Stephens and Keys are the first Americans to meet in a US Open final since Serena Williams defeated older sister Venus Williams in the 2002 final. But it has only been since January’s Australian Open that two Americans have met in a Slam final, with a pregnant Serena carrying the day again over Venus Williams.

No matter which American captures the title on Saturday, it will be the fifth time in the past nine Grand Slam events that a first-time Slam champion is crowned. The run of new major winners began on the New York hardcourts and includes Italy’s Flavia Pennetta at the 2015 US Open, Germany’s Angelique Kerber at the 2016 Australian Open, Spain’s Garbine Muguruza at the 2016 French Open and Latvia’s Jelena Ostapenko at this year’s French Open. The last American to become a first-time Slam winner was Jennifer Capriati at the 2001 Australian Open.

Every three years starting in 2005, there have been four different winners of the women’s titles in the year’s four Grand Slams and this year will keep that run going after Serena Williams won the Australian Open, Jelena Ostapenko won the French Open and Garbine Muguruza won Wimbledon. The 2005 lineup was Serena in Australia, Venus at Wimbledon, Justine Henin at Roland Garros and Kim Clijsters at the US Open. In 2008 it was Maria Sharapova at Melbourne, Ana Ivanovic in Paris, Venus in London and Serena in New York. In 2011 it was Clijsters in Australia, China’s Li Na at the French Open, Petra Kvitova at Wimbledon and Aussie Samantha Stosur at the US Open. In 2014 it was Li in Australia, Sharapova in Paris, Kvitova at Wimbledon and Serena in New York. 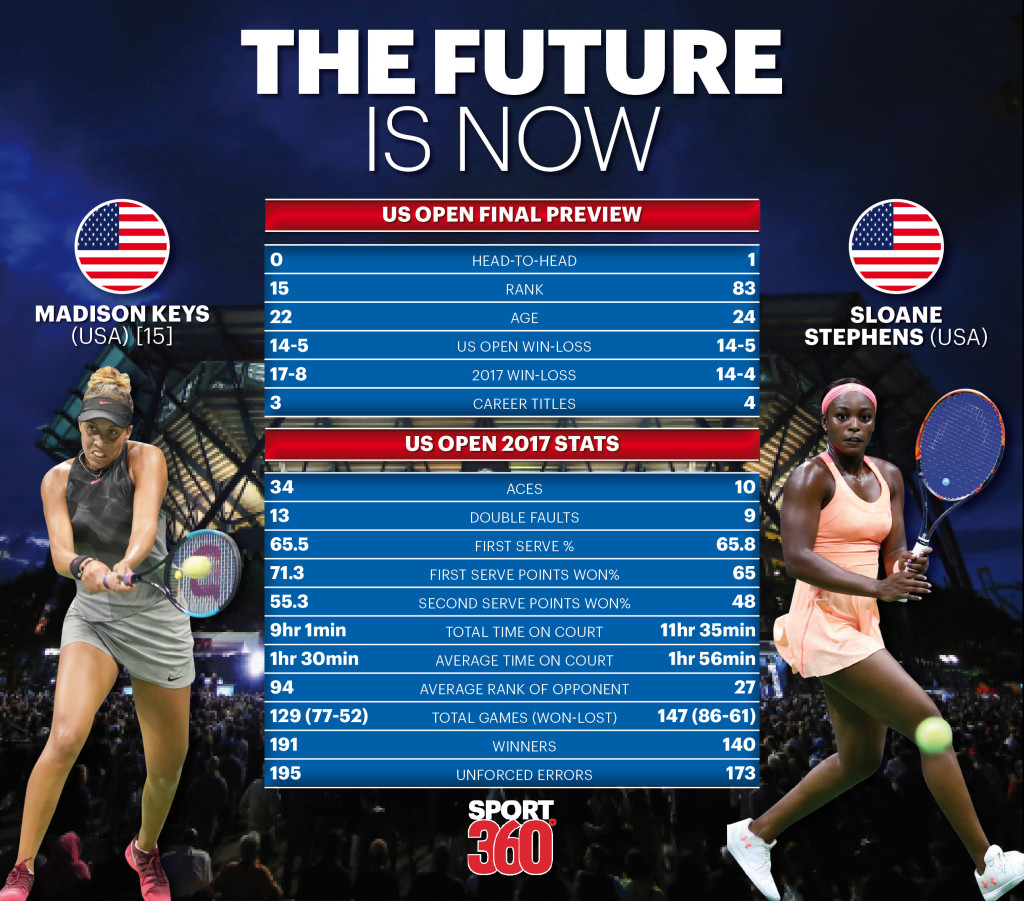 HOW LOW CAN YOU GO AND WIN

At 83rd in the world rankings, Sloane Stephens would be the fourth-lowest-ranked Grand Slam champion since computer rankings began in 1975. Evonne Goolagong was unranked when she won the 1977 Australian Open after giving birth to her first daughter seven months earlier. Kim Clijsters was unranked after coming out of retirement when she won the 2009 US Open. And Chris O’Neil was ranked 111th when she won the 1978 Australian Open. Stephens would also become just the fifth unseeded player to win a Grand Slam title in the Open Era (since 1967) after O’Neil, Clijsters, Serena Williams at the 2007 Australian Open and Jelena Ostapenko in June at the French Open.

Each of this year’s US Open finalists was recovering for a serious injury just three months ago. Keys underwent her second left wrist surgery in 10 months after a second-round exit at the French Open while Stephens spent 11 months recovering from a left foot injury before making her return at Wimbledon. Both showed signs of what was coming in US Open hardcourt tuneups, however, with Keys winning at Stanford and Stephens reaching the Toronto and Cincinnati semi-finals.

Sloane Stephens' stunning summer and how she went from surgery to...

Sloane Stephens ousts Venus Williams to set up US Open final with...

Juan Martin Del Potro not 100% fit to face Rafael Nadal in US Ope...