Rafael Nadal and Kevin Anderson will face-off in the US Open final on Sunday, which will give the former a chance to claim a third New York crown and 16th Grand Slam trophy while the latter will be going for his first major title.

It will be their fifth meeting overall, and just second at a Slam, with Nadal owning a clean 4-0 record lead over the tall South African, who has only ever mustered to win one set over the Spanish star.

Nadal is contesting his 23rd Grand Slam final while Anderson is experiencing his first.

Here’s a closer look at this final match of the Grand Slam season. 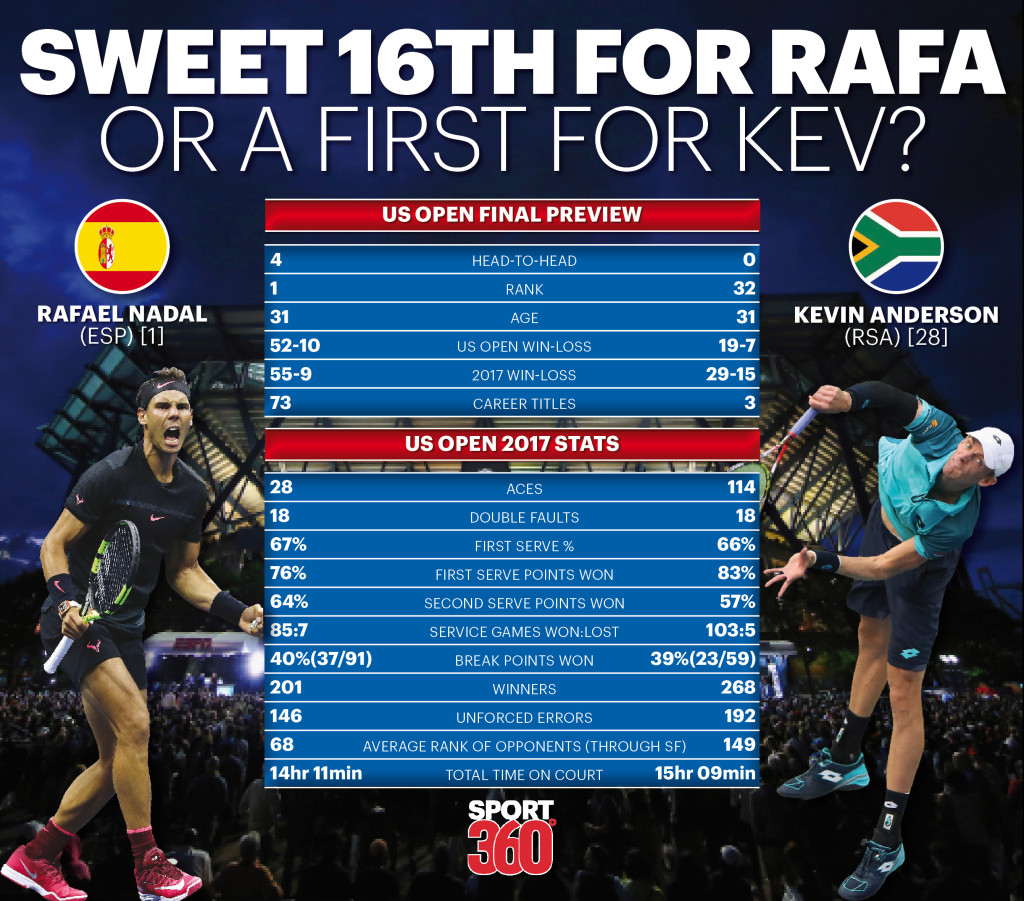 ANDERSON HAS BEEN HITTING BIG

It’s no secret that Anderson is a power-hitter but to get a better idea of how aggressive he’s been this tournament, just check out his winner count. In his last three matches alone, the South African fired a combined 179 winners across 12 sets played. That’s an average of approximately 15 winners per set.

He is of course the ace leader of the tournament, with a total of 114 aces, and has won an average of 83 per cent of the points on his first serve throughout the event.

Anderson has dropped serve just five times this fortnight and he actually held serve in his first 55 service games this US Open until he finally faltered.

I’m just happy I have another excuse to share this adorable photo again ? #usopen final!! pic.twitter.com/OckNDPhnla

The theme this US Open, and probably this year, has been the stunning success of players who have returned from lengthy injury-enforced breaks, many of which included surgeries.

From US Open finalists Madison Keys (two wrist surgeries) and Sloane Stephens (foot surgery), to semi-finalist Juan Martin del Potro (three wrist surgeries), to Nadal, who has battled physical problems throughout his whole career, this fortnight has been a bundle of inspiration for anyone injured out there (we’re not forgetting Petra Kvitova and Kaia Kanepi of course).

Anderson’s own comeback tale is equally impressive. The 31-year-old fought past ankle, knee and shoulder issues last season then had to skip this year’s Australian Open with a hip injury. He slipped to No. 80 in the world in January – his lowest ranking in seven years – but now has a chance to re-enter the top-10 if he wins the title on Sunday.

WHO WILL BE MORE CLUTCH?

Nadal has saved 18 out of 25 break points (72%) faced this fortnight while Anderson saved 17/22 (77%). Their break point conversion rate is very similar with Nadal winning 40% of the break point opportunities he created and Anderson winning 39% of his. In a match-up where serve will be key, it will be interesting to see who will be more clutch – the 23-time Slam finalist or the debutant?

IS ANDERSON READY FOR A ‘BIG FOUR’ TEST?

Anderson emerged from the bottom half of the draw, which was the softer side in the absence of Andy Murray, who was initially the No. 2 seed but withdrew a day after the draw was made leaving it lopsided and unbalanced. The early exits of Alexander Zverev, Marin Cilic, Tomas Berdych and other high seeds left that bottom half wide open and a quick look at the average ranking of Anderson’s opponents – 149 compared to 68 for Nadal – will show he could have had a much tougher path under different circumstances.

Of course a ranking never tells the whole story and Anderson has had to overcome some tricky opponents like Borna Coric, Sam Querrey, Ernests Gulbis and Pablo Carreno Busta. But facing Nadal in a Slam final is a totally different ball game. Is he well-prepared for it?

3 — Nadal is one of just three men to have won a Grand Slam as a teen, in his 20s and in his 30s, along with Pete Sampras and Ken Rosewall.

32 — ranked 32nd in the world, Anderson is the lowest-ranked Grand Slam finalist since a 38th-ranked Jo-Wilfried Tsonga reached the Australian Open final in 2008.

33 — years since a South African man last reached a Grand Slam final. Anderson is the first man from his nation to do so since Kevin Curren lost the 1984 Australian Open final to Mats Wilander.

52 — years since a South African man last reached the US Open final – that was Cliff Drysdale in 1965.

Rafael Nadal and Kevin Anderson advance to US Open final

Five facts as Sloane Stephens and Madison Keys get set for all Am...

Sloane Stephens' stunning summer and how she went from surgery to...