Wimbledon: Time to accept Novak Djokovic may never be the same again, but that's not a bad thing

Djokovic was in good spirits in press on Sunday.

LONDON, GREAT BRITAIN — “Novak Djokovic is in a crisis”. That’s a line that has been reiterated many times over the past 12 months.

The man who looked like he couldn’t lose even if he tried to was suddenly losing matches. He then lost his No1 ranking. He lost all four Grand Slam titles he had held at the same time. He slipped to No4 in the world for the first time in 2009.

His every misstep has been chronicled to no end and many have been trying to uncover the real mystery behind his decline (by his own standards it’s a decline).

Where is the insatiable Djokovic who had been approaching every match like it was his last? Where has his boundless ambition gone?

The truth is, that animal-like Djokovic, who lived and breathed victories and bulldozed everything that came his way is gone. Instead, you now have a different version. One that appreciates that there is more to life than just tennis.

Djokovic is on a new path of self-discovery and he’s committed to his approach. There is absolutely nothing wrong about that. And that doesn’t mean he won’t be winning or dominating again. It would be foolish to write him off because as his fellow ‘Big Four’ peers have proved to us time and time again, their class truly is permanent.

But the way he’s going to be winning is expected to be different.

“I used to base all my happiness on winning a tennis match. I think many athletes today are doing that. So I try not to do that anymore because it’s not like I don’t care, but winning and losing a tennis match, absolutely not,” Djokovic told reporters at Wimbledon on Sunday, ahead of his opener against Slovakia’s Martin Klizan on Tuesday.

“Of course, I would love to win every single tennis match I play in, but I don’t try to take that as very essential, you know, moment in my life which determines my happiness.

“It’s a different approach, but I’m still here and I’m still motivated, I still keep on going. I’m still glad to kind of experience whatever professional tennis career has for me.”

It is obvious that the time where tennis consumed every fibre of his being had taken a toll on him. He admits it meant he was not paying attention to other things in his life outside the sport.

“It’s not a process that it’s only lasted for last few weeks. I mean, it’s lasting the whole lifetime. It’s the constant evolution. It’s just that when the things are completely going your way, in this case in professional tennis career, when I was winning constantly and being dominant in the tennis world, you’re happy and you’re content, you feel like everything is kind of revolving around tennis. But it’s not like that. Some other things were suffering during that time,” he confessed.

“So it’s always, I guess, figuring out what’s the right balance and right formula to be completely, I guess, in peace and satisfied with yourself, and everything that you do, you know.” 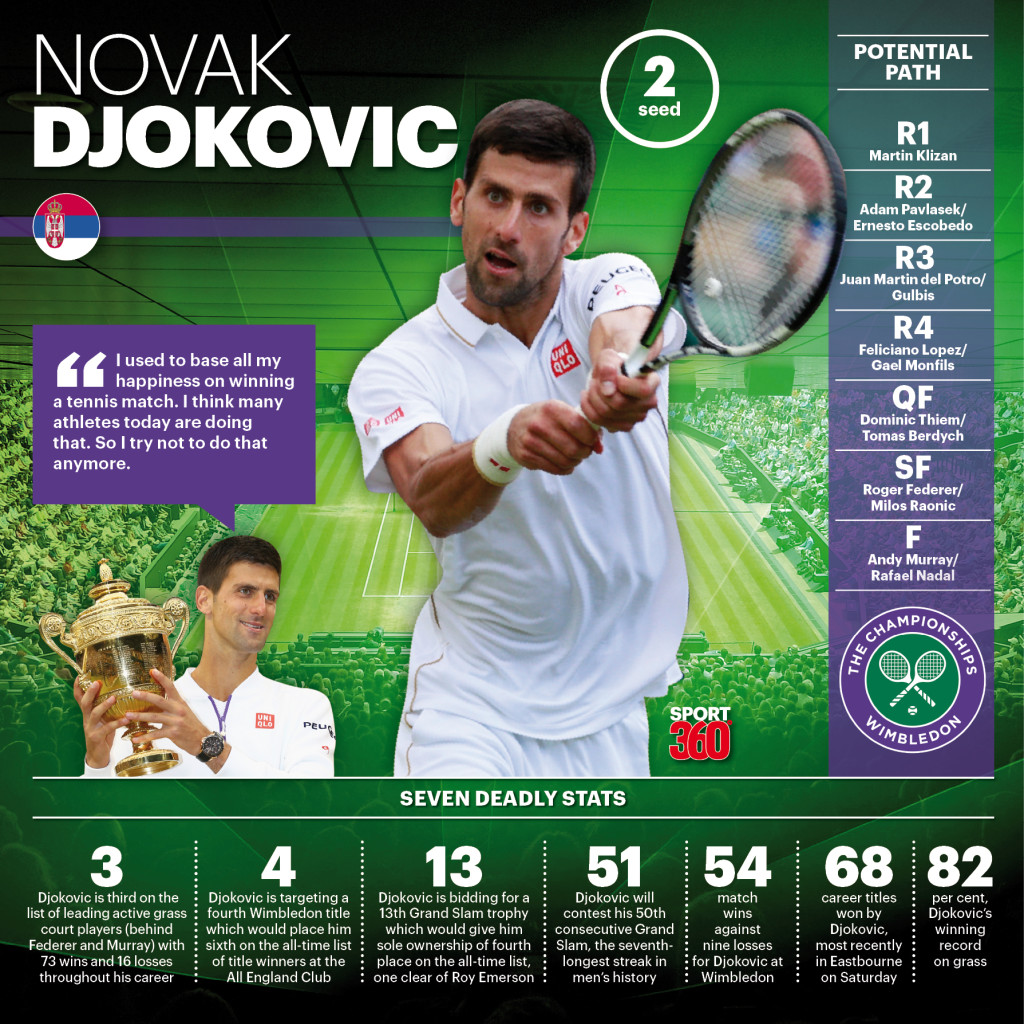 If indeed that approach is leading him to contentment then you can imagine it’s only a matter of time before he’ll be winning again.

He won’t be acting like a tsunami wiping everything in front him, because that would disrupt the equilibrium he’s trying to achieve in his life. But he would still be winning. Except it will be on his own terms.

“It seems to me that, especially nowadays, everything is observed through the lens of material success, who lifts more trophies gets more respect, more fame, more money, and a better status in the society,” added Djokovic.

“It’s hard in this kind of, so to say, values, set of values, to kind of go through that kind of process. But for me, it’s equally important, even more important, to take care of myself as a human being. What goes around off the court, as well. In the process, I believe that that’s going to positively affect my own tennis career, as well.”

If you look at the choices he is making and the people he is surrounding himself with, you’ll realise they are people who can only agree with his approach and enrich his process. Andre Agassi, a man who is helping him without getting paid. Mario Ancic, an old friend who has always been known to be one of the nicest guys on tour.

Djokovic is trying to focus on what matters and turns out, that to him, it’s not just about winning.

Wimbledon: Del Potro jokes about his multiple run-ins with Djokov...

Andy Murray can lose his No1 ranking at Wimbledon, here are the p...

Andy Murray thinks battle for No1 could add spice to Wimbledon

Five things we learned from the Wimbledon women's draw