Wimbledon diary: Men's favouritism in show court scheduling at All England Club must be addressed

As Caroline Wozniacki suggested on Monday, the topic of gender inequality in scheduling at Wimbledon feels like an age-old question here at the All England Club.

Over the seven days of play so far this fortnight, there have been two men’s matches and one women’s scheduled each day on Centre Court, and that has also been the case for Court No. 1 for five of the seven days.

This issue always becomes more obvious on the second Monday of the tournament – dubbed ‘Manic Monday’ – because Wimbledon chooses to have all men’s and women’s last-16 matches scheduled on the same day, due to the fact they have no match play on ‘Middle Sunday’.

And while no one can argue that having 16 fourth round matches to schedule in one day is not a headache, the choices made by the referee, in discussion with the club chiefs and others, tend to be real head-scratchers.

Scheduling the match between world No1 and 2016 runner-up Angelique Kerber and 2015 runner-up Garbine Muguruza, on Court No. 2 was a bizarre decision, and it looked even worse when the two women played their hearts out in a two-hour 18-minute battle of top-quality tennis.

The commitment the decision-makers continue to have to the 2:1 ratio in favour of the men is staggering and the response seems to always be the same.

In 2016, All England Club chief executive Richard Lewis said: “It’s not about men and women, it’s about what are the marquee matches.”

On Monday, a year later, he chose the exact same words when talking to the press: “I wouldn’t say it’s favouritism. I would say it’s taking the marquee matches.”

It’s expected that he is this prepared with the same answer, since gender inequality in scheduling arises as a controversy almost every year.

Wimbledon schedules three matches on Centre Court starting at 13:00 and Andy Murray suggested on Monday that a solution would be to have four matches instead, and start a little earlier, that would accommodate two matches for each singles draw. Overusing the Centre Court grass however could be an issue.

The point is not necessarily about having an equal number of matches for each draw, but it’s about treating them with the same respect so that a compelling women’s match is not ignored.

The problem with constantly putting women’s matches on the peripheral courts is that their best product is never showcased on the main stadiums, which means fewer people will get acquainted with the players. You can’t brand these women’s matches as non-marquee contests when you are part of the reason they are being seen that way.

It’s important that leading voices on the women’s tour speak out about such issues because not enough is being done about it.

Angelique Kerber on Monday was far from scathing in her comments but at least she admitted she was “really surprised” to be scheduled on Court No. 2.

The 20-year-old Jelena Ostapenko, who won Roland Garros last month and hasn’t lost a Grand Slam match since, also said she expected to be on a court more prominent than No. 12. 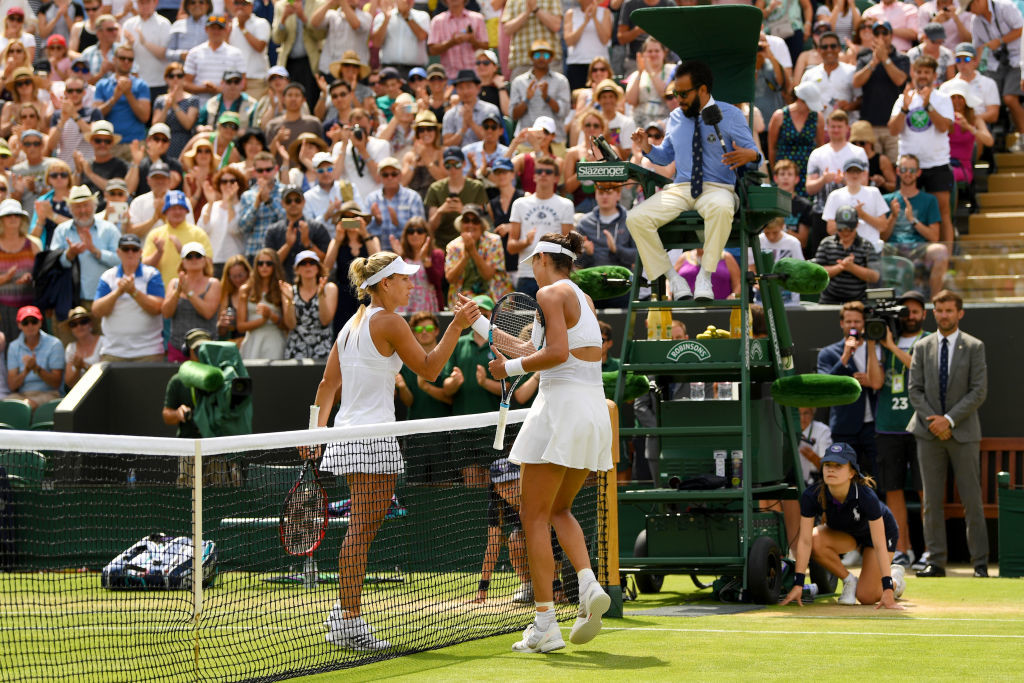 Scorcher: Kerber’s match with Muguruza was a high-quality affair.

Many other female players however choose to avoid the topic and say they don’t mind playing anywhere. That is, of course, their prerogative. But it’s also not helping the situation. When stats and facts show that men are playing twice as many matches on Centre Court than the women, pretending it’s not an issue is hurtful to the women’s game.

It may feel like a futile argument to some, but opening it up for debate is better than staying silent.

Wimbledon: Kerber 'really surprised' about scheduling at All Engl...

Wimbledon: Svitolina questions how much longer Ostapenko can keep...

Wimbledon: Ostapenko is 'in her own world' when she's on court, s...

Wimbledon: Nadal, Murray and rest of the players hit the practice...