Wimbledon diary: Muguruza's tunnel vision can do her well against Venus Williams

There was a moment during Garbine Muguruza’s swift demolition of Magdalena Rybarikova in the Wimbledon semi-finals on Thursday that stood out to me.

The Spaniard slammed a bullet of a down-the-line return winner that landed smack in the corner to break for 3-0 in the second set, then immediately walked to her bench, almost before the ball had touched the ground, and without once taking a glance at her opponent.

It’s like she had tunnel vision and was literally just playing the ball and not another human being across the net.

“I just wanna win, no matter who is in front of me,” she later said in a TV interview.

It often baffles me when a player says ‘I just focus on myself, irrespective of who I’m playing’. How? Tennis is so often a chess match, and tactics should be tailored based on specific opponents.

But when I listen to Muguruza talking about concentrating on her side of the net and executing to perfection, I realise how much that strategy is working for her.

She said she stepped onto the court against Rybarikova “super-confident” and it showed.

If you have that much belief in your own abilities, perhaps it’s true that nothing else matters.

“I could not do almost anything today,” said a helpless Rybarikova after the match.

“She didn’t give me much chance to do something.” 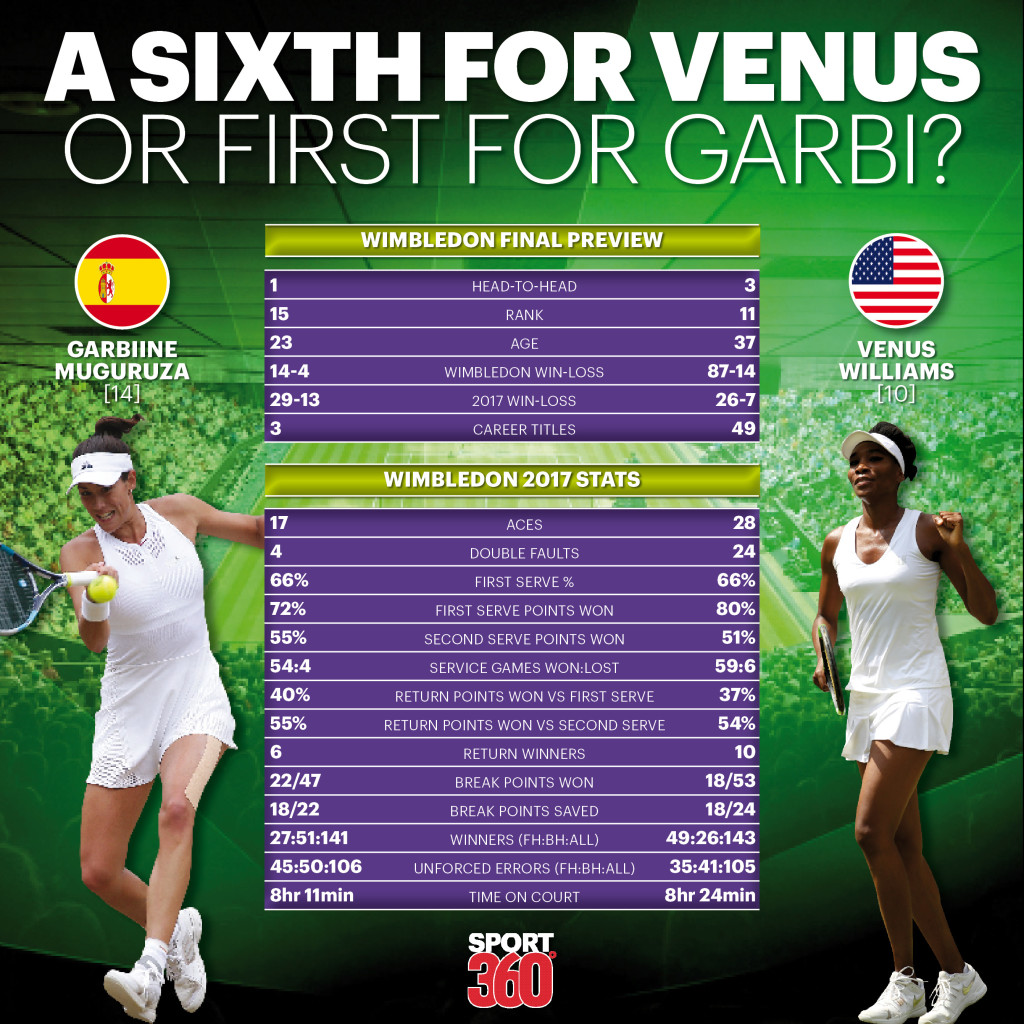 Muguruza will need to do the same against Venus Williams in the final on Saturday. Because the moment Muguruza realises she is facing a five-time Wimbledon champion who has also been progressing through the draw with so much confidence, maybe that is when the Spaniard will falter.

Muguruza lost to Serena Williams in the final here two years ago. She then beat the American in the French Open final last season. She hasn’t reached any final at any tournament since.

The 23-year-old says she’s both older and wiser now and will try to enjoy the experience of being in a Wimbledon final once again.

“I’m feeling pretty good. I think it’s a good moment right now. It goes very fast. So I’m trying to enjoy. The previous times, you know, you’re so concentrated that you cannot enjoy as well,” said Muguruza on Friday.

“I know tomorrow I’m looking forward a lot to go on the court. Last match here. Try to change things after the last two years. That’s it. Just trying to enjoy also.”

Having experienced both, the feeling of walking away a winner and the feeling of going home as the runner-up from a Grand Slam final, Muguruza knows it’s way more fun getting the bigger trophy.

“Definitely I want to win, for sure. Is very different to hold the trophy than to have – you know… I really felt when I achieved the final in 2015, and I won the French Open, I could feel the difference between winning a Grand Slam and not winning. I think it’s a huge difference. So I definitely want to be the one who takes the big one,” said the No14 seed.

Whether she wins or not on Saturday, Muguruza will once again be faced with a typical challenge for her: How can she step up for the smaller tournaments the way she does at the Slams? The fact that she only owns three titles in total, one of them being a Grand Slam remains a true mystery.

“I find it strange because she doesn’t have consistency so much. She can do some tournaments very well, and some tournaments she can be out very quickly. I don’t know why,” said Svetlana Kuznetsova, who lost to Muguruza in the quarter-finals here.

Maybe Muguruza doesn’t know why either, but it’s imperative for her to figure it out post-Wimbledon, because surely waiting another 12 months to get to another final is not a scenario she’d want to go through again.

Wimbledon: Venus Williams winning the title would be one of bigge...

Muguruza motivated for the future in spite of defeat